Qayyarah was the first Iraqi city to be freed from Islamic State control in the last year. The city, south... 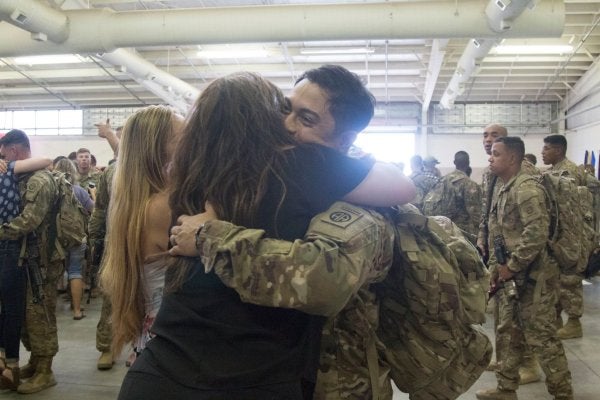 Qayyarah was the first Iraqi city to be freed from Islamic State control in the last year.

The city, south of Mosul and along the Tigris river, was liberated shortly after the 18th Airborne Corps deployed from Fort Bragg to helm the coalition fight against the terrorist group in Iraq and Syria.

In the months that followed came the long siege against ISIS in Mosul. That city, the largest in Iraq outside of Baghdad, was liberated earlier this year.

In recent days, the city of Tal Afar was liberated, too. And in Syria, coalition-backed forces have cleared Dabig, Al-Bab, Tabqah and, most recently, the old city of Raqqah.

For more than 12 months, families of 18th Airborne Corps soldiers have watched those developments from afar.

More than 100 soldiers celebrated those successes with their families Monday as they returned to Fort Bragg from Operation Inherent Resolve.

In all, more than 200 paratroopers returned from the anti-ISIS fight shortly before noon, including more than 100 soldiers from the 2nd Brigade Combat Team, 82nd Airborne Division who had been deployed for the past nine months as part of an advise and assist mission in Iraq.

Ila Dermanoski said families watched news of the anti-ISIS fight closely. They are proud of what their paratroopers were able to accomplish as part of a large international team.

The latter held a homemade sign that said “For 12 months we’ve been sad. Get out of the way so we can hug our dad!”

“It is great to be back home,” Lt. Col. Dermanoski said.

In recent days, paratroopers had experienced numerous delays on their return to Fort Bragg.

“There were a lot of anxious days and nights,” he said.

Family members said the delays were trying and forced them to be patient.

Angelica Rutherford said the wait was difficult, but well worth it.

Upon seeing her husband, Spc. Josh Rutherford, she leaped into his arms.

Now, Rutherford said he would try to make up for being gone for so long.

The soldiers were greeted at Fort Bragg by the 18th Airborne Corps chief of staff, Brig. Gen. Xavier Brunson, who thanked the soldiers for their service.

The homecoming was the latest for the 18th Airborne Corps, which deployed hundreds of paratroopers to Iraq and Kuwait to help lead the anti-ISIS fight.

This week, the corps – led by Lt. Gen. Stephen J. Townsend – is expected to transfer authority to soldiers from the III Corps from Fort Hood, Texas.

Last week, Townsend said he was proud of the work the 18th Airborne Corps, the coalition and partners in Iraq and Syrian have accomplished.

Forces in Iraq and Syria have liberated more than 82,000 square kilometers of ISIS territory, according to statistics provided by the 18th Airborne Corps. More than 5.5 million people are no longer living under the rule of the terrorist organization.

“This has been a remarkable year,” Townsend said. “A challenging year. A rewarding year as well. The world should know this campaign is not close to being finished. There’s very hard work ahead to do.”