Fort Bragg soldiers are once again at the helm of the fight against the Islamic State. Hundreds of soldiers with... 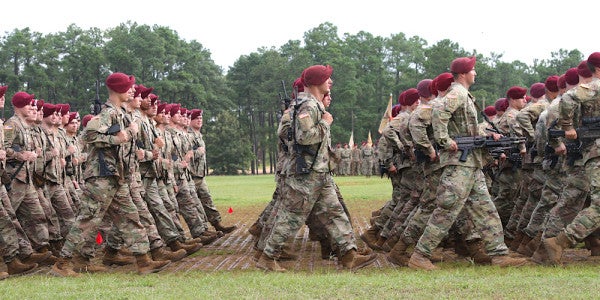 Fort Bragg soldiers are once again at the helm of the fight against the Islamic State.

It’s a familiar mission for the command, which almost a year ago returned to Fort Bragg from the same mission.

Then, as now, the 18th Airborne Corps assumed command of the mission from the III Corps of Fort Hood, Texas. It now leads a coalition of 79 partner nations and organizations dedicated to advising, assisting and training forces fighting against ISIS in Iraq and Syria.

Gen. Joseph L. Votel, the commanding general of U.S. Central Command, oversaw a ceremony marking the transfer of authority. He said he was confident the 18th Airborne Corps team was ready to continue the fight against ISIS and set conditions for regional stability.

When last deployed as the CJTFOIR, the 18th Airborne Corps helped Iraqi and Syrian allies push ISIS out of key cities in both countries.

Today, the terrorist organization no longer controls the largest swaths of territory it held four years ago, when Operation Inherent Resolve began. And the symbolic cities of Mosul in Iraq and Raqqa in Syria have long been wrested from its control.

According to officials, the coalition has trained and equipped more than 170,000 Iraqi security forces and thousands of Syrian troops. It has recaptured 99 percent of the territory previously held by ISIS and liberated nearly eight million citizens from the group’s rule.

LaCamera, speaking of what comes next, said the aim was now to wipe ISIS from existence.

“As we look to the future, we must and will be aggressive and resolute in everything we do to ensure ISIS and its ideology are completely eradicated,” he said.

Approximately 400 soldiers from the 18th Airborne Corps are deployed, serving in Iraq, Syria and Kuwait. The troops quietly deployed in recent weeks and include about 70 Army Reserve soldiers mobilized to bolster the corps headquarters.

In his final remarks to the coalition, Funk looked back on the past year and paid his respects to all soldiers, sailors, airmen, and Marines who have served as part of Operation Inherent Resolve.

He said thousands of Iraqi and Syrian forces, as well as dozens of coalition service members, had sacrificed everything as part of that fight. And the result was an ISIS that is a far cry from what it was in 2014, when it controlled large swaths of territory in Iraq and Syria.

In Northeast Syria, the general said, hope has replaced fear and oppression.

Votel praised the work of Funk and III Corps and said the coalition has made tremendous progress in improving Iraqi troops and clearing pockets of ISIS fighters in Hawijah, Anbar and the Euphrates River Valley.

Funk said the coalition’s past year has been a remarkable success but cautioned that the fight isn’t over.

“As we stand on the verge of the defeat of ISIS’s so-called physical caliphate, we cannot let up now,” Funk said.

“While there is still a tough fight ahead, we are confident that 18th Airborne Corps will lead the coalition to secure the lasting defeat of ISIS,” he added.