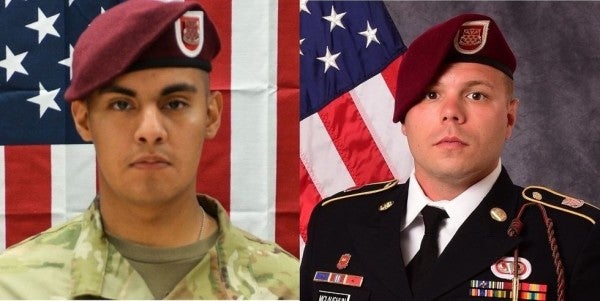 Two Fort Bragg paratroopers killed in Afghanistan this month are being remembered for their leadership and dedication.

Maj. Gen. James Mingus, the 82nd's commander, said the two paratroopers represent the best of the nation and the Army. Col. Art Sellers, commander of the brigade, said McLaughlin and Villalon answered the nation's call to deploy into harm's way without hesitation.

McLaughlin's mother, Glenna Carroll, told a Virginia television station that her son left behind four children. She said he will be remembered as a dedicated father, husband and son.

“It's a tremendous loss for all of us,” Carroll said. “His whole world was his children and his wife.”

“It's devastating, and I will do everything I can to share his memory. And I know their mother will as well because I know he's the light of her life as well,” Carroll said. “It saddens me, but I'll do everything that I can to make sure that they know all about him and how much he loved them.”

Fort Bragg officials said a funeral procession for McLaughlin will move from Fort Bragg to Lafayette Funeral Home in Fayetteville on Saturday morning.

The city of Aurora, Illinois, reported Villalon's death as a “heartbreaking loss” in a post on its Facebook page. Mayor Richard C. Irvin, an Army veteran, said Villalon wanted to make a difference in the world.

“Sadly, Miguel made the ultimate sacrifice as he protected our freedom from the front lines,” Irvin said. “The City of Lights shines much dimmer because of this loss.”

George Allen taught Villalon at East Aurora High School. Villalon was captain of the physical fitness team and a member of the drill team in the Navy Junior ROTC program, said Allen, who was a teacher in the program for 18 years.

“He was a quiet, unassuming leader,” Allen said.

Allen said he wasn't surprised that Villalon enlisted in the Army. Villalon had the self-discipline, self-awareness and self-confidence needed for the military, Allen said.

“He would have been successful in whatever he did,” said Allen, who served in the Navy for 24 years and retired as a master chief petty officer.

If the JROTC was doing a community service project and needed volunteers, Villalon's hand would be the first to go up, Allen said. If the instructor needed 10 volunteers, Villalon would recruit 15 and politely ask if the other five could participate.

“He wasn't looking for another rank or another award,” Allen said. “He was looking to be helpful and to be part of the team.”

Villalon was respectful and well-mannered, Allen said. If given a job to do, Villalon would do it and do it correctly, the teacher said.

“This nation is looking for heroes,” Allen said. “Look no further than Miguel Villalon.”