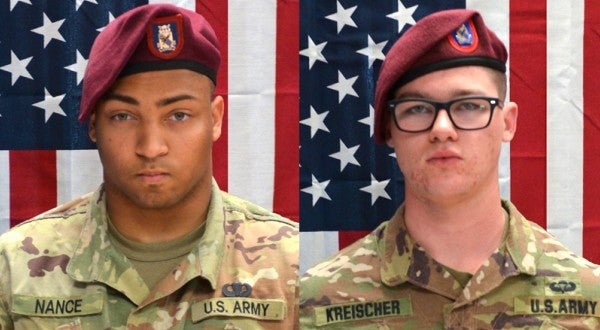 Spc. Michael Nance, 24, of Chicago, and Pfc. Brandon Kreischer, 20, of Stryker, Ohio, were killed by small arms fire, according to a statement released by the 82nd. A Defense Department statement said they died in Tarin Kowt, Uruzgan province, as a result of wounds sustained in a combat related incident.

The Associated Press reported that the paratroopers were shot and killed by a member of the Afghan army.

“These young men were true All Americans and embodied the qualities of selfless service and courage as they answered our nation's call to deploy to Afghanistan,” Col. Arthur Sellers, commander of the 3rd Brigade Combat Team, said in the 82nd statement. “Our focus is now providing their loved ones with every available resource to help them in this most difficult time.”

Kenon Forest, Nance's great uncle, told the CBS 2 news station in Chicago that Nance was grateful to be able to serve his country.

“Brilliant young man; really enjoyed his life; was really looking forward to being in the Army – it's like a lifelong dream of his,” he said.

Ohio Gov. Mike DeWine ordered flags on public buildings and grounds in Williams County and at the Ohio Statehouse to be flown at half-staff in honor of Kreischer's life and service, according to the governor's website. Carrie Schlade, the mayor of Bryan, Ohio, and local school officials honored Kreischer during a news conference Tuesday, according to a report in the Toledo Blade.

Kreischer graduated from Bryan High School last year and participated in football, wrestling, track and choir, The Blade reported. The Bryan City Schools planned to offer support and counseling as needed to students and families within the district, Diana Savage, the Bryan schools' superintendent, told the paper.

School officials planned to discuss a way to honor Kreischer, according to The Blade. The mayor said more events were expected to be held in his honor.

Nance's awards and decorations include the Purple Heart, the Bronze Star Medal, the Army Service Ribbon, the Afghanistan Campaign Medal, the Global War on Terror Service Medal, the Combat Infantryman Badge and the Basic Parachutist Badge.

Nance is survived by his father of Chicago and mother of Glenwood, Illinois, according to the division's statement.

Kreischer, a rifleman, joined the Army in June 2018 and also completed Basic Combat Training, Advanced Individual Training and Airborne School at Fort Benning. His awards and decorations include the Purple Heart, the Bronze Star Medal, the Army Service Ribbon, the Afghanistan Campaign Medal, the Global War on Terror Service Medal, the Combat Infantryman Badge and the Basic Parachutist Badge.

Kreischer is survived by his wife of Fayetteville.

The soldiers' deaths came 10 days after the 3rd Brigade Combat Team had assumed authority for operations in Afghanistan. The paratroopers are responsible for missions ranging from base security to developing the capacity of Afghan security forces in locations throughout the country.

The brigade is deployed to Afghanistan in support of Operation Freedom's Sentinel, which started in 2015. The operation is supporting NATO's Resolute Support Mission to continue training, advising and assisting Afghan security forces; and to continue the U.S.'s counter-terrorism mission against the remnants of al-Qaida.