Embroidered, backed in Velcro and steeped in 99 years of storied military history, the patch is simple. A local Army... 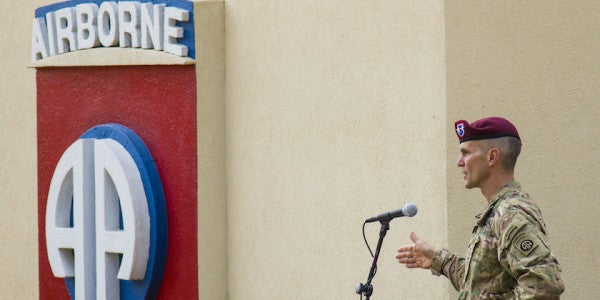 Embroidered, backed in Velcro and steeped in 99 years of storied military history, the patch is simple.

A local Army Reserve unit, the 824th Quartermaster Company, formally adopted the familiar “AA” of the All American 82nd Airborne Division in a ceremony Saturday on Fort Bragg's Stang Field.

The patch symbolizes the partnership between the unit and the 82nd Airborne Division Sustainment Brigade, which have been paired as part of an Associated Units program announced by Army leaders earlier this year. The program links 28 active and Reserve units based on geographic location and capability gaps.

At Fort Bragg, the program will allow the 824th's parachute riggers to work more closely with those belonging to the 82nd Airborne. That will help fill a shortage in available parachute riggers, but also help ensure the Reserve soldiers remain ready to deploy, if needed.

That partnership won't officially start until next month, but Saturday, officials said the units were far from strangers.

Lt. Col. Jeremy St. Laurent, commander of the 189th Combat Sustainment Support Battalion, said the unit began working with their active duty counterparts on a daily basis in April, and conducted annual training with the 82nd Airborne this summer.

In that time, they have ensured the 82nd Airborne Division has been able to continue to train, even as its forces have been spread around the globe for special training events.

At the same time, nearly two dozen of the soldiers have prepared for an upcoming deployment to support U.S. Central Command operations in the Middle East.

“They are not strangers,” St. Laurent said, calling them one of the best aerial delivery companies anywhere in the Army.

Capt. Hung Truong, commander of the 824th, was one of the first to don the 82nd Airborne patch. He leads the roughly 120 soldiers of the unit and previously said he expects more and better opportunities to train to come from the partnership.

“We're riggers and we pack chutes and guess what, the 82nd jumps all the time,” Truong said. “This relationship works out well for us. It just makes sense.”

At the order “Don patch,” the formation erupted with the sound of tearing Velcro as the soldiers reached into their shoulder pockets and affixed the 82nd Airborne patch to their uniforms.

According to officials, the “AA” patch is nearly as old as the 82nd Airborne Division itself.

The unit was created in 1917, comprised of troops from a wide variety of backgrounds. They included immigrants who could barely speak English, but also soldiers from every state – 48 at the time.

That earned the division the nickname “All Americans” and soon, its soldiers were sewing the “AA” onto the unit's original patch – a red square with a blue circle in the middle.

Soldiers have worn the patch in every conflict since World War I.

Col. Matt McFarlane, the 82nd Airborne's deputy commander for operations, said the patch shows that, no matter active duty or Reserve, the soldiers are one team.

Spc. Ronald Turner provides overwatch protection from atop a hill while other members of his platoon search a village in Mianashin, Afghanistan Oct. 1

He said similar patching ceremonies have taken place with other units in the Associated Unit program, with Reserve and Guard units adopting active duty patches and vice versa.

“The importance of today's event can't be overstated,” McFarlane said. “We are one Army.”

More than a decoration, he said the patch is a symbol of the unit's history.

“It symbolizes a lot,” McFarlane said. “The lineage of this great division brings a lot to what we do every day. We look towards our history as we prepare for the future.”