“I couldn’t have asked for better help in a situation like that.” 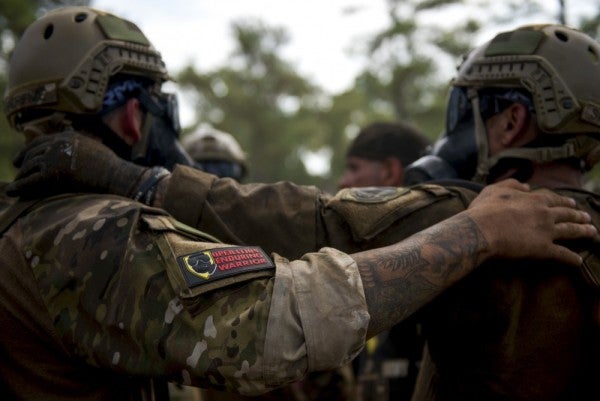 Joshua Moerhing, a soldier at Fort Bragg, was enjoying his Memorial Day weekend on Jordan Lake when he says he saw a boat run over a man who had fallen into the water.

It was around 7 p.m. Sunday when Moehring, 31, another soldier, Erik Hansen, 25, and a former soldier, Anthony Kensev, 26, jumped into action. They got the badly injured man out of the water and cared for him on their boat until they docked at Poplar Point Boat Ramp in Apex.

The woman driving the pontoon boat the man fell from, Crystal Lynn Oster, 39, of Moore County, is accused of running him over. She was charged with impaired boating causing death or serious injury, a felony, and operating a boat in a reckless manner, a misdemeanor, according to a magistrate’s order.

Two 14-year-olds were also on the boat Oster was driving, Moerhing told The News & Observer in a phone interview.

“The woman was panicking, worrying about him,” Moehring said. “She was very concerned about his well-being.”

The man, identified only as Matt with an unknown last name on the magistrate’s order, was taken to a hospital for surgery, Moehring said.

“I just picked up a guy on my boat, and he got chopped up by a propeller,” Moehring told a 911 operator after calling for an ambulance. “He’s going to bleed out.”

“The military has always told all of us, stay calm, especially in situations like this,” he later told The N&O.

Moehring said the man was cut from the thigh to the shin. He remained conscious and was able to tell the soldiers his name.

The magistrate’s order described Matt’s injury as “laceration of the knee requiring surgery.”

“We put a tourniquet on his leg. We’re tying it down. We’re trying to keep him alive,” Moehring said in the 911 call. “It’s as tight as we could get it and stopped the bleeding.”

Moehring said they had a first aid kit with a tourniquet on board with them.

As he spoke to the 911 operator, he called to the others on board his boat, “Keep pressure on his leg.”

It took all three of them to take care of him, Moehring said in the interview.

“I appreciate Anthony and Erik, especially with Erik’s medical background,” Moehring said. “He did a spectacular job. I couldn’t have asked for better help in a situation like that.”

The N&O called a phone number listed for Oster on the magistrate’s order and messaged her on Facebook, but could not reach her.

She was released from the Chatham County jail, Sgt. Nathaniel Green with the N.C. Wildlife Resources Commission, one of the responding agencies, told The N&O.