More than 80 soldiers from the 82nd Airborne Division quietly deployed in late September. Unlike most missions undertaken by conventional... 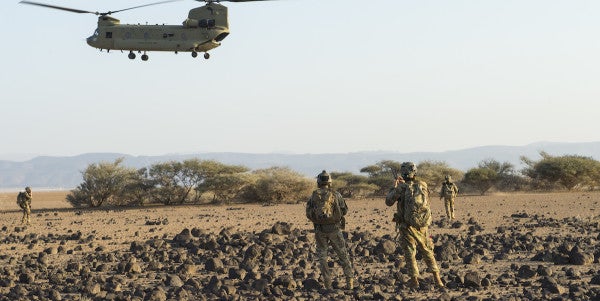 More than 80 soldiers from the 82nd Airborne Division quietly deployed in late September.

Unlike most missions undertaken by conventional Army forces, this one came with nearly no fanfare. There was no announcement the troops would be leaving. And officials on Fort Bragg, as well as families of the soldiers, were instructed to keep the mission quiet.

Over the weekend the soldiers returned to Fort Bragg, welcomed by family and friends at Green Ramp, and broke their silence.

For the past five months, the detachment of 85 soldiers provided aviation, personnel recovery and casualty evacuation capabilities to the Combined Joint Task Force – Horn of Africa mission, which spans an area roughly the size of the eastern United States.

The mission ends an era for the pathfinders of F Company – representing the last time the unit was called to action before its inactivation later this month.

“This was the last hurrah,” said Sgt. Justin Whitney, one of the deployed pathfinders. “But at least we got a hurrah in.”

The first of four Air Force C-5 Galaxy aircraft carrying the detachment and the soldiers' equipment – including four CH-47 Chinooks – landed at Fort Bragg's Pope Field late Saturday. Inside the hulking plane were 25 soldiers and two of the bus-sized helicopters.

They were greeted by dozens of family and friends, many carrying balloons and homemade signs.

“Back last fall, with very short notice – less than six weeks' notice – these troopers were told they might have to go to the Horn of Africa,” Gilbert said.

The soldiers, in some cases, weren't able to say where they were going or what they would be doing, he said, explaining how the mission was kept a secret.

But with the soldiers home, and others returning over a span of several days, Gilbert said he could finally say the detachment provided critical, at times lifesaving support.

“You guys have represented the battalion, this brigade and more importantly this division with pride,” he said. “We're all very, very proud of what you've accomplished.”

Maj. Brad Deloach, who commanded the deployed detachment, said being in the 82nd Airborne Division – and having part of the Global Response Force mission – helped prepare the soldiers and their families for the short notice deployment.

The Global Response Force requires that part of the 82nd Airborne Division be ready to deploy anywhere in the world with little notice. Parts of the 82nd Combat Aviation Brigade are constantly a part of that mission, in addition to their duties in supporting other missions around the globe.

“The families understand the GRF mission and they understand it's the 82nd Airborne,” Deloach said. “It's anywhere in the world.”

Once notified of the mission, officials quickly pulled the team together, merging the Chinook company with the pathfinders.

The new detachment trained together at Fort Bragg and Marine Corps Air Station Cherry Point to prepare for their unique mission, which included working with Navy personnel based on ships off the coast of Africa.

While deployed, the soldiers were based at Camp Lemonnier, Djibouti, and filled a mission previously undertaken by Air Force pararescue units. They provided support to soldiers, Marines, sailors, airmen and international troops who serve as part of the combined joint task force.

Once deployed, Deloach said the biggest challenges came in traversing such a large area – aviators had to know where every fuel stop was to ensure they could make it to their mission – and staying on alert.

“It's a mental adjustment,” he said of constantly being on call for five months.

But Whitney, one of the deployed pathfinders, said the mind-set was not too different from what his unit is used to.

“We're always ready to go,” he said. “We're out the door in 15 minutes if needed. That's the lifestyle.”

American pathfinder units were created in World War II by Gen. Jim Gavin, former commanding general of the 82nd Airborne Division. The units, formed from soldiers of the 82nd and 101st Airborne Divisions, were tasked with jumping ahead of larger groups of paratroopers to mark drop zones and pinpoint enemy positions.

Whitney said it was an honor to be part of the final pathfinder mission. But it's also bittersweet knowing the pathfinder company will be inactivated following a Feb. 24 ceremony on Fort Bragg.

The Army is inactivating its pathfinder units as part of a larger force transformation.

For families, one of the biggest challenges was keeping the secrecy of the mission.

Dana Whitney said the questions about her husband never stopped.

Dana said families were even instructed not to put their soldier's rank on care packages sent overseas. They also had to be careful on social media.

“We had to tiptoe around what we said to people,” she said. “It made it a little more stressful, but thankfully he was still able to talk to us.”

As Dana waited, the couple's 4-year-old daughter, Ruby, made her father an early Valentine.

“I am excited, I am anxious, I am nervous – everything rolled into one,” Dana said. “I don't know if I can actually put it into words.”

Leo was 2 weeks old when his father left for Africa.

The last five months had been tiring, Sara said. But the family spoke often, and Sara said she was excited to show her husband how much their son has grown.

Deloach's parents, John and Georgie of Chapin, South Carolina, said they were proud of what their son and his soldiers were able to accomplish, but even happier to have him home.

Georgie said her son was well-trained and confident, and she had no doubt the unit would return to Fort Bragg proudly.

Waiting at Green Ramp with Deloach's wife, Rebecca, and their children, the family said they were excited to get their soldier back.

“What a beautiful day,” John said. “We would love to have him 15 minutes away and see him every day, but we're prouder of what he does, what his family means to him and what he does for this country.”