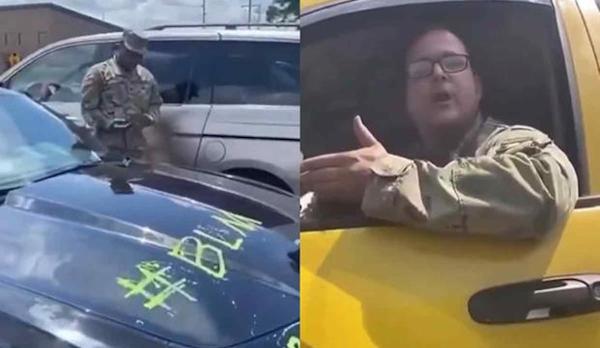 A heated exchange between two Fort Campbell, Kentucky soldiers that was captured on video was followed by a conversation, apology and resolution, base officials said Wednesday.

In the one-minute, spliced video, a soldier in a yellow pick-up truck demands that another soldier, out of frame, remove “Black Lives Matter” decals from the front of his personal vehicle.

“Are you wearing a uniform right now? Where in the Uniform Code of Military Justice does it say that you can participate in any political protest that is going on?” the soldier in the truck says.

The other soldier, identified in the Facebook video as a specialist, retorts that the truck has a Confederate flag in it.

The video, filmed Wednesday, ends there without an apparent resolution to the altercation. As of Thursday night, it had been viewed nearly 30,000 times. But Fort Campbell officials told Military.com that the two soldiers, both within Campbell's Division Sustainment Brigade, didn't leave things there.

“The battalion command team sat both soldiers down and they had a discussion about what happened,” Lt. Col. Charles Barrett, a Fort Campbell spokesman, told Military.com. “They both agreed to remove the markings on their vehicles and came away with a better understanding of each other's views.”

Barrett added that the soldiers were not asked to remove the signage, but came to the decision on their own. He said to his knowledge they were not in violation of any military policy. Nor was any equivalence made between Black Lives Matter and the confederate flag.

The Defense Department prohibits service members from political advocacy and demonstrations in uniform and bars large political signs and banners from being flown from private vehicles, but permits bumper stickers and non-political vehicle markings.

More insight into the aftermath of the encounter comes in another public video, shot and posted to YouTube by another Fort Cambell soldier, Sgt. Shyrone Clark. Clark, who had seen the original video, walks to Rubino's shop, visibly enraged, and ready for a confrontation.

“I don't even know the soldier, but there was a viral video going out last night with his face and that f—–g truck right there, and he had a Confederate flag or whatever. This [other] soldier had BLM all over his car,” Clark said in the video. “That's not actively out there protesting on the side of the road. You can have whatever on your car.”

Rubino, who can be heard off-camera, immediately admits he was wrong.

“I really wasn't trying to be offensive. I was misinformed and I interpreted things the wrong way,” he said. “It was hypocritical for me to have that on my truck and then call that soldier out.

I hope the soldier understands I was not in any way trying to offend or anything like that.”

After several more minutes of conversation, Clark is visibly appeased.

“The Confederate flag doesn't bother me, people saying there's nothing wrong behind it, I don't care what they fly,” he said. “I have white friends that fly it.”

After more conversation with Rubino's first sergeant, he wishes them a good day and departs.

Military.com has reached out to the Fort Campbell employee, identified as Allie Shaw, who posted the original confrontation video and shared the follow-up video with Clark for comment and further insights into the matter.

The incident comes as Black Lives Matter protests erupt across the nation following the death of George Floyd, an unarmed man, at the hands of police in Minneapolis.

While for many the Confederate flag represents the nation's ugly history of slavery and racism, the posters in this case emphasized that their top concern was equal representation of viewpoints.

“My thing is I have no issue with the people who have a confederate flag. It's their first right,” Shaw wrote in a comment. “However, why is that theirs but supporting BLM isn't ours?”