More than 1,200 vehicles will roll south from Fort Carson this week in what's again the biggest convoy operation since... 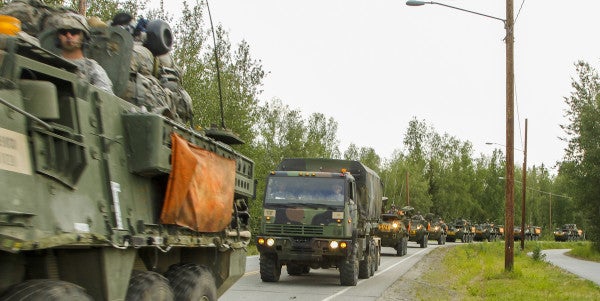 More than 1,200 vehicles will roll south from Fort Carson this week in what's again the biggest convoy operation since World War II.

It's a bigger version of the convoys sent to the Piñon Canyon training area in 2015 and part of a massive 5,000-soldier 1st Brigade Combat Team training exercise that's designed to get the unit ready to fight a mock war in the California desert.

Preparations for the 143-mile trek have taken nearly a year, and the unit's mechanics have been hopping to make sure all of its trucks and eight-wheeled, 18-ton Stryker vehicles are ready for the long haul.

“The past three weeks have been busy,” said Staff Sgt. Ronald Griffith, who has helped oversee the convoy planning.

While small elements have already headed out, the main convoys will start rolling from Fort Carson on Tuesday using two routes to reach the training area east of Trinidad. They'll head south in about 64 separate convoys of about 20 vehicles rather than tangling Colorado's highways with one massive snake of military vehicles.

Maj. Kevin Boyd, the brigade's spokesman, said planners have worked with local cops along the route and with the state Department of Transportation and the Colorado State Patrol to ease impacts of the move.

Drivers will have plenty of warning thanks to the state's network of electronic highway signs.

“Every sign from south of Denver to the New Mexico border will have information about the convoy,” Boyd said.

Often, Army equipment rolls through Colorado by train. But the 1st Brigade is designed to drive itself to war on its own tires.

Maj. Chris Manganaro, who oversees logistics for the brigade, said the convoy helps the brigade train for that wartime role.

“It gives us the opportunity to spread our wings as a unit,” he said.

But, if you thought family vacations take a ton of planning, you've never experienced an Army road trip.

Every element of every one of the more than 60 convoys is planned down to the minute.

Some will leave the post and head south along Colorado 115 before cutting east on U.S. 50. Others will take Interstate 25 all the way to Trinidad before hitting the two-lane blacktop to the training area.

The brigade has a rest stop planned for each route. And at the halfway points, the unit will establish ad-hoc filling stations and repair garages to fix faulty rigs and top off fuel tanks.

The run to Piñon Canyon is the opposite of NASCAR. Army drivers will crawl along Colorado byways at a placid 40 mph – a speed limit set by the state Transportation Department to ensure a safe journey.

Soldiers could spend five hours or more on a drive that takes civilians three.

The Stryker can carry as many as 11 soldiers in combat and can crawl up 45-degree slopes on eight knobby tires.

While ungainly on the highway, the Stryker comes into its own on the battlefield, where it can pack 105 mm cannon, 120 mm mortars, 40 mm grenade launchers or .50-caliber machine guns while delivering an infantry squad to an objective in safety – if not comfort.

“A lot of people came out waving and cheering us on,” he said.

In fact, Colorado's love of the military is one of the brigade's big concerns on the roadway.

Drivers eager to thank soldiers aboard the Strykers tend to swerve and weave a bit too much for comfort.

“Thank us,” Boyd advised. “But be careful when you're doing it.”