Fort Carson soldiers have put up a series of startling statistics during six months of heavy training in Europe. In... 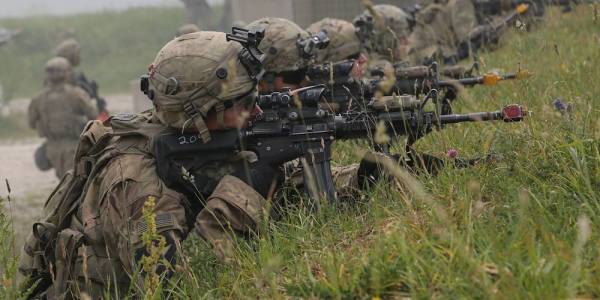 Fort Carson soldiers have put up a series of startling statistics during six months of heavy training in Europe.

In the 180 days deployed, soldiers from the 3rd Armored Brigade Combat Team, 4th Infantry Division have put in 153 days of training with allies and community engagements across a swath of the continent from the Baltic to the Black Sea. To supply the brigade's more than 4,000 troops, the unit's truckers have logged more than 100,000 highway miles.

After taking part in the biggest European training exercise for U.S. troops since the Cold War, which wrapped up in Germany last week, the brigade's troops had fired more than 1 million rounds from their pistols, rifles, machine guns, tanks, Bradley Fighting Vehicles and artillery pieces.

“It has been absolutely tremendous,” said the brigade's boss, Col. Christopher Norrie.

The colonel spoke to The Gazette by phone last week as his soldiers packed up their gear for yet another mock war, this time in Hungary. His soldiers had just fought mock battles alongside a full team of American allies, including the usual suspects from the North Atlantic Treaty Organization and newer partners including Ukrainian tankers and Albanian infantry.

“We fired 7,000 rounds of artillery,” Norrie said of the 10-day exercise. The unit also drilled with allied Air Forces and coordinated with a French command team.

“I think the dynamic here that was most interesting was the international environment.”

With tensions on the rise across Europe fueled by an increasingly aggressive Russia led by President Vladimir Putin, the training has sent a clear message: Don't mess with the U.S. or its friends.

The brigade headed to the continent from Colorado Springs in January, bringing more than 2,000 tanks, trucks and artillery pieces across the Atlantic by ship. The goal was to demonstrate how quickly a U.S.-based unit could be ready to fight overseas.

After gathering in Poland, the unit spread out from Estonia to Bulgaria.

Moving the unit across the vast expanse of Europe showed how quickly its soldiers could show up for battle. The training exercises that followed have shown how they can win the fight, Norrie said.

“We view deterrence as presence plus lethality,” Norrie said.

At a German training area, the brigade's M-1 tanks proved dominant in a simulated war that included traditional combat and modern-day threats including a cyberattack.

Large-scale tank training has been a rarity for the Army and 3rd Brigade in recent years. Since 2001, the unit has served multiple tours in Iraq and Afghanistan, but its tanks and other heavily armored rigs were parked as its soldiers fought as infantry against insurgent groups.

Now, the Army is focused on its ability to take on “near-peer” enemies, like Russia and China.

That explains the abundance of training rounds fired by the brigade – numbers unheard of in recent years as the Pentagon tightened its belt to deal with budget cuts.

Having the unit overseas also allowed the 3rd Brigade to practice working with allies.

Norrie said his unit was successful in bridging language and cultural barriers thanks to liaison teams. The unit put its troops in the headquarters of allied forces and the other nations reciprocated, creating a solution for problems as they arose.

He said cooperation was also fueled by having a clear common goal.

“That shared interest of expressing the will of the alliance, it's a very powerful motivator,” he said.

The training for the brigade is also proceeding at a pace unseen outside wartime.

After wrapping up the training in Germany, tank crews were busy washing mud off their tracks and heading out for training in Hungary.

The brigade, which will head back to Fort Carson in about three months, has become expert at shipping gear across the continent.

“We have done 180 different rail movements throughout Europe,” Norrie said.

The pounding pace of the unit's work would be enough to grind down even the most veteran of soldiers.

But Norrie said it has actually had the opposite effect.

Instead of dragging, 3rd Brigade soldiers are walking taller, he said. The platoons, companies and battalions have become close-knit families during weeks of intense work.

Mechanics have set records for the number of vehicles available for war despite their heavy use. Gunnery scores have gone sky-high as soldiers hone their skills, he said.

Norrie said the brigade has the swagger of an undefeated team.

“If you see our soldiers they are so proud of what they have done,” he said.