A Fort Carson corporal killed a fellow soldier while ‘messing with’ a gun, police say

The two soldiers had previously deployed to Afghanistan together. 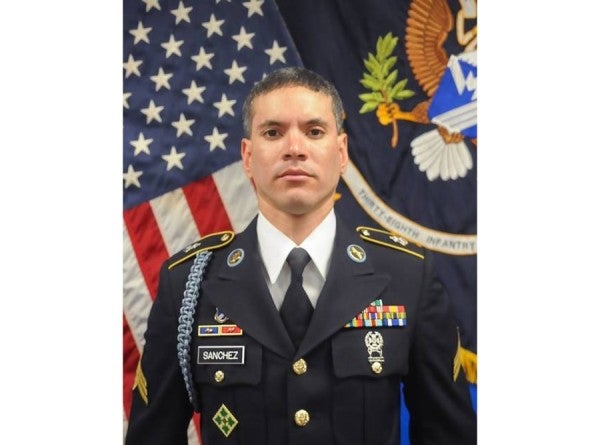 For days, Alexis Sanchez talked about dressing up for Halloween as Spider-Man, the Marvel Comics hero his 2-year-old son, Grayson, adores, according to his ex-wife.

He never got the chance to surprise the boy.

Officers found Sanchez, 30, with a fatal gunshot wound in his chest Oct. 27 after responding to a shooting at 3853 Westmeadow Drive, according to a police affidavit.

William Garcia, 22, was arrested on suspicion of manslaughter after witnesses told police he fired the fatal shot.

Sanchez was doing what he loved — playing video games — when he was killed, said his ex-wife, Alexis Tueller..

The two moved from Arlington, Va., to Colorado Springs in August 2017 with their son, when Sanchez was stationed to Fort Carson, Tueller said.

After the couple got divorced, Tueller and Grayson moved to Utah in February 2018. Since then, Sanchez requested time off every opportunity he had to see his son.

“He made every effort to get over here to see him,” she said.

Tueller recalled the day her son was born and how proud Sanchez was to become a father.

She remembered Sanchez as a person “fluent in everything he talked about” and someone who often did extensive research on his interests, including guns.

He owned three guns and enjoyed learning how they worked, she said. That curiosity, she said, likely played a role in his decision to join the Army.

Sanchez rarely kept a straight face while taking photos and was “always acting goofy,” said friend Pedro Carrion, who was a pastor in Sanchez's hometown of Miami. Sanchez was a poet who loved art and music.

After becoming a Christian when he was about 20 years old, Sanchez quickly became very active in the church community, volunteering at the children's ministry on the weekends and leading youth groups on Friday nights, he said.

Carrion said he was surprised when Sanchez, then a “skinny, lanky, emo kid,” decided to join the Army in 2014.

“However, Alex loved to serve others so it made sense that he would want to serve his country,” he said.

Sanchez and Garcia, who is accused of killing Sanchez, deployed to Afghanistan together, he said.

Garcia was a corporal in the 4th Infantry Division, said Fort Carson spokeswoman Brandy Gill. During his three-year service, he earned several awards for his time in combat overseas, records show.

Garcia told detectives the gun fired after he dropped it on the kitchen floor.

But both Carrion and Tueller are skeptical of Garcia's account.

Tueller refused to called it an accident.

“It wasn't an accident,” she said. “An accident is falling down the stairs and getting stitches. Not killing someone.

“He was just a wonderful man and didn't deserve it.”

Part of the investigation, according to El Paso County Coroner Dr. Leon Kelly, involves deciding whether the discharge of the weapon was caused by a complete disregard for others' safety or was unintentional.

In 2018, five El Paso County residents died from reckless use of a firearm.

Attorney Megan Downing characterized the case as “the most tragic kind — an accident.”

“Mr. Sanchez was Mr. Garcia's friend,” he said. “They served their country together. Mr. Garcia has spent his whole adult life protecting lives, especially those with whom he served. This is the last thing he ever expected to happen.”

Garcia was released from El Paso County Jail on Oct. 28 on bail. His next court hearing is scheduled for Dec. 18.