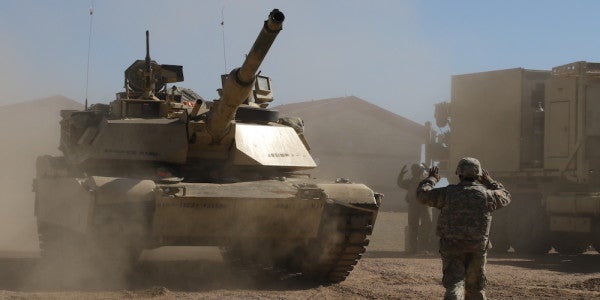 Fort Carson’s 3rd Brigade Combat Team wrapped up a week of field training earlier this month, combining simulations and live-fire exercises to prepare its soldiers for battle with top-tier enemies like Russia and China.

Even with two brigades now fighting in Afghanistan, and division headquarters set to deploy later this year, the 4th Infantry Division has started to shift its training to prepare away from counter-insurgency operations to aim for a fight with near-peer adversaries.

“We train against the highest end threat we think we can face,” said Col. Mike Simmering, 3rd Brigade commander. “Our ability to execute this level of operations can be applied several places throughout the world – against any near-peer adversary.”

Preparing to fight a well-trained enemy army stands in stark contrast with the type of fighting U.S. forces have faced since 2001, as America remains embroiled in conflicts ranging from Afghanistan to Iraq and Syria after 17 years of continuous warfare.

But the nearly two decades of fighting terrorist groups across rugged, under-developed terrain has created a situation where the nation’s military readiness is “emerging from a period of strategic atrophy,” the Defense Department said in its 2018 National Defense Strategy report.

“We are facing increased global disorder, characterized by decline in the long-standing rules-based international order—creating a security environment more complex and volatile than any we have experienced in recent memory,” the Pentagon said in the report. “Inter-state strategic competition, not terrorism, is now the primary concern in U.S. national security.”

To prepare for those conflicts, units must train on a large scale, mimicking the conditions of a conventional battlefield, Simmering said.

“One person alone can’t get much done but when you get 4,000 people together in an armored brigade, you can accomplish some pretty amazing things,” he said. “One of the hard things to do is to train an organization this large at the same time. By adding simulators we were able to accomplish that.”

While portions of the brigade headed out to Fort Carson’s training area with the unit’s M1A2 Abrams tanks, Bradley Fighting Vehicles and M109 Paladins, the remaining soldiers went to rooms full of projectors and computers linked together to create a complex battlefield simulation.

“Inside the simulation, we have the enemy,” said Maj. Chuck Bies, the brigade operations officer. “When the enemy appears, we can coordinate support from artillery, the Air Force and attack helicopters. It all comes together to create a brigade-sized exercise.”

One difference between counter-insurgency fighting and slugging it out with a similarly-equipped enemy unit is that important tactical decisions must be made further up the chain of command, Bies said. The many pieces of a brigade must work in concert to defeat the opponent.

And brigade-sized training allows commanders to test their tactical acumen, he said.

But on Fort Carson’s limited training area, fielding an entire armored brigade for a weeks’ worth of training isn’t always possible, making the simulators critical in preparing the unit and it's commanders.

“It is letting us train everybody from the guy driving the tank all the way up to the brigade commander in his Bradley on the ground controlling the fight,” Bies said.