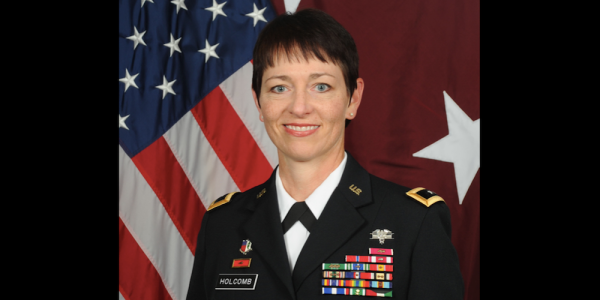 Holcomb is coming to Fort Detrick as the first nurse to serve as commander of the medical command, according to spokeswoman Chelsea Bauckman. Holcomb previously served as a deputy commanding general at the U.S. Army Medical Command at Joint Base San Antonio.

Installation commanders at Fort Detrick are much like mayors and oversee all operations within the post’s perimeter while fostering relationships with the surrounding community.

The medical command oversees multiple organizations, including some at Fort Detrick such as the U.S. Army Center for Environmental Health Research and the U.S. Army Medical Research Institute of Infectious Diseases.

Attendees fanned themselves with their programs in the heat Thursday as uniformed soldiers carried out marching orders on Blue and Gray Field at Fort Detrick.

Lt. Gen. Nadja West, the Army’s surgeon general, was the presiding officer at the change-of-command ceremony. “This is one of the most diverse and complex commands in all the Army,” West said.

She said she was proud of Lein’s leadership when the command was tasked with helping fight the Ebola outbreak in Africa. “Brian remained steadfast,” she said.

Lein said he considers himself lucky to have worked at Fort Detrick. “I’ve been extremely proud and humbled to lead this command and this organization for the past two years,” he said.

“Thank you for keeping me full of chocolate, happy, on time and prepared,” he told his former colleagues.

Hood College President Andrea Chapdelaine said the college has “enjoyed a great partnership” with the post and MRMC under Lein. He enabled some collaborative research for students and faculty while he served as installation commander.

Frederick Mayor Randy McClement said Lein has been an enthusiastic presence at city events and as a community member. “He’s been a great partner,” McClement said.

Frederick County Executive Jan Gardner said Lein has been a valuable voice at the table, not just in logistical matters such as snow removal, but also in economic development.

She is enthusiastic about Holcomb’s selection. “I love that we have a woman commander,” Gardner said.

She said the county will support military leadership as the installation transitions to a new commander.

“Barb, I am so envious and jealous of you. This is now all yours,” he said.

Commanders typically serve two-year assignments with the option to apply to the Army for a one-year extension.