A Fort Drum soldier on leave found himself unexpectedly called on to act on Christmas Day after he witnessed a stabbing in Lubbock, Texas. 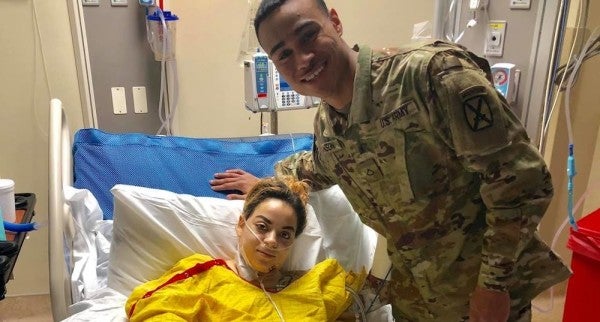 A Fort Drum soldier on leave found himself unexpectedly called on to act on Christmas Day after he witnessed a stabbing in Lubbock, Texas.

According to the Lubbock Police Department report, police were called around 4 a.m. to a club after reports of a stabbing. The victim, Passion Monea Burtraw, had two cuts in her neck and about eight stab or cut wounds on her abdomen, according to the report.

Local TV station KCBD NewsChannel 11 reported that Pfc. D'Marcus Ranson stepped forward from a crowd of about 200 people who witnessed the stabbing, taking off his shirt and applying pressure to Ms. Burtraw's wounds.

The day after Christmas, Pfc. Ranson posted a photo to Facebook of him apparently visiting Ms. Burtraw in the hospital, dressed in his camouflage uniform with a 10th Mountain patch on the sleeve.

“2 people from 2 totally opposite worlds, as crazy as things got that night I'm thankful I was able to be there for Monea Burtraw in a time of need,” he wrote as a caption to the photo. “It was experience I'll never forget but more than anything I thank God for keeping her in his arms and allow me to see her smiling and recovering well this afternoon. Most definitely will be in prayers. Get well and stay strong!”

Ms. Burtraw posted a photo to her Facebook page on Monday of her hugging Pfc. Ranson, one arm wrapped in bandages.

According to a GoFundMe page set up to support Ms. Burtraw, she was stabbed 17 times.

“She is in a stable but very bad condition as she cannot use the right side of her arm because it's paralyzed at the moment still and it will never work the same again,” the page reads in part.

Mr. Ranson did not immediately respond to a request for an interview sent through Facebook. Fort Drum public affairs did not return calls on Monday.

The incident was picked up by a Twitter page called U.S. Army WTF! Moments, which shared Mr. Ranson's photo.

“Such a tragic event, but so thankful and proud that PFC D'Marcus Ranson was present and able to provide assistance,” wrote the official 10th Mountain Division Twitter account on the post. “An example of doing the right thing in a chaotic situation.”