Fort Hood officials earlier this week said foul play is not suspected in the case of Pvt. Corlton Chee, who died Sept. 2 after collapsing during physical fitness training 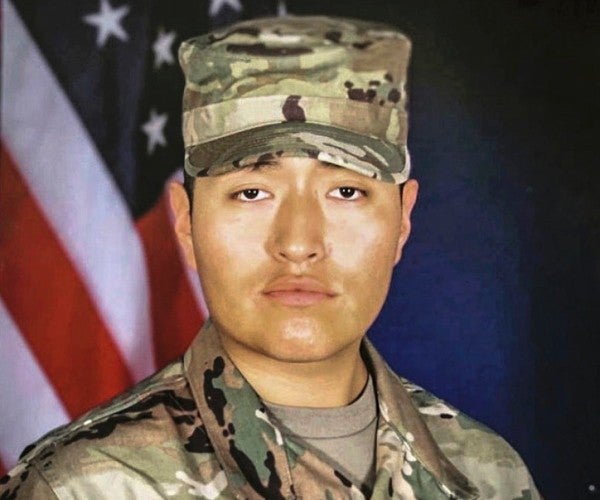 AUSTIN, Texas — Fort Hood officials earlier this week said foul play is not suspected in the case of Pvt. Corlton Chee, who died Sept. 2 after collapsing during physical fitness training.

In a statement released Tuesday, officials at Fort Hood said the Southwestern Institute of Forensic Sciences is still working with the Army to determine the 25-year-old soldier’s cause of death.

“It is too early in the process to draw any conclusions about why he collapsed or passed away,” the statement from the Army said.

The soldier on the morning of Aug. 28 was instructed to run a total of 2.2 miles as part of his Army training, officials said.

Weather records show temperatures at Fort Hood that morning in the low 80s but with a relative humidity of about 70%, which would have made it feel even hotter.

Chee, who ran with 11 other soldiers, made it part of the way before the group was told to run back to the starting point as fast as they could, according to the Army.

Witnesses said Chee was running at the front of the group with no signs of illness before he collapsed near the finish line.

Army officials on Tuesday said the run was a normal part of daily physical training.

Chee was immediately treated by others in his unit until medics arrived, Army officials said.

Medics, who at first could not find a pulse, said they got the soldier’s heart beating again before taking him to a hospital on post where he was admitted into the intensive care unit.

However, his condition worsened the next day and he was eventually moved to a civilian hospital in Temple.

Chee — who is survived by his parents, fiancee and young sons — died with his family by his side on Sept. 2, Fort Hood officials have said.

The training incident on Aug. 28 occurred just days after the body of another Fort Hood soldier was found hanging from a tree about 30 miles from Killeen.

Fort Hood officials say foul play also is not suspected in Sgt. Elder Fernandes’ death, but was instead ruled a suicide by medical examiners.

However, the post and its leadership have come under scrutiny for the Army’s handling of soldier disappearances, slayings, suicides and reports of sexual assault and harassment.

The most prominent case was that of slain Spc. Vanessa Guillen, whose remains were found in late June.

Authorities believe Guillen was killed on post in April by a fellow soldier, Spc. Aaron David Robinson, who dismembered and disposed of her body.

Robinson shot himself and died July 1 when authorities confronted him during the investigation, according to Killeen police.

Amid a series of protests calling for justice in Guillen’s case, the post’s top commander was removed from his position last week.

A request by Guillen’s family and supporters for a congressional investigation into Fort Hood following her death and other incidents of violence at the post was also granted on Tuesday.

Two U.S. House subcommittees this week have launched a joint investigation into “an alarming pattern of recent tragedies” at Fort Hood.

This announcement means Congress will again investigate seven of the recent deaths, including Fernandes’ and Guillen’s, once Army leadership delivers documents related to the cases by Oct. 2.

It was unknown on Wednesday whether Chee’s case would be added to the investigation.