The Times found 159 noncombat deaths of Fort Hood soldiers since the beginning of 2016, which included seven homicides and 71 suicides. 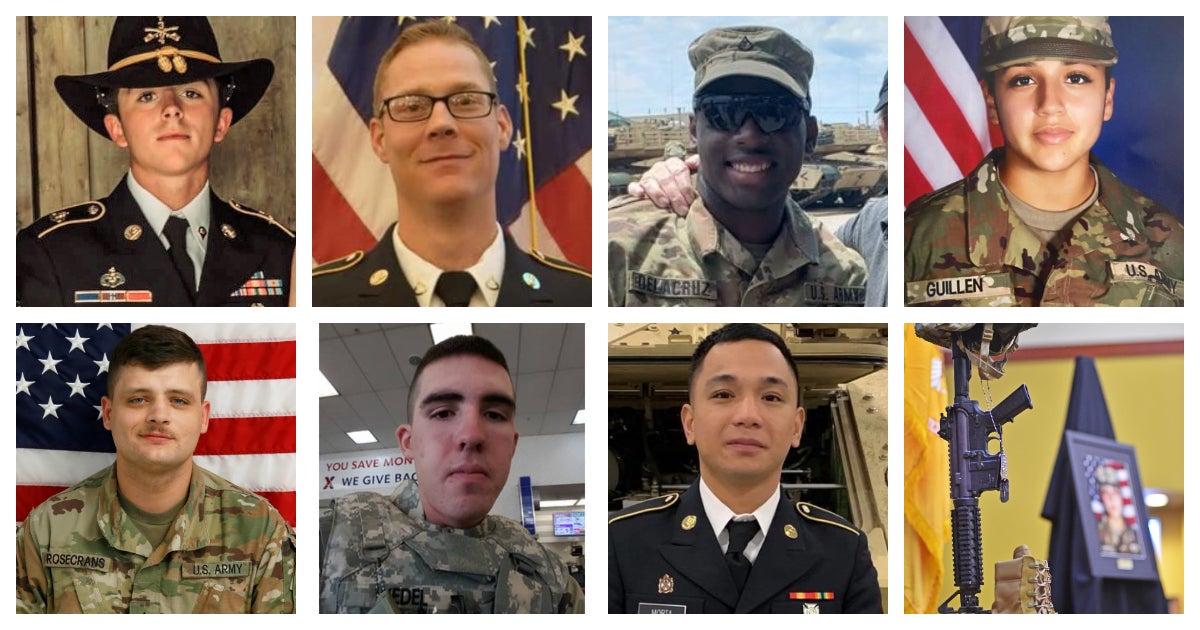 AUSTIN, Texas — Like many mothers of active-duty soldiers, Patricia Troyan had always feared her son would be lost on the battlefield.

She never imagined, though, that her bright, courageous 21-year-old soldier would die by his own hands several months after being stationed at Fort Hood.

Her story illustrates a year marked by grief, pain and sometimes anger for many families linked to Fort Hood, the U.S. Army’s largest military installation historically known by the nickname plastered on a sign outside its front gates: “The Great Place.”

For the past 20 years, Fort Hood earned a national reputation as a staging ground for troops deploying to wars in Afghanistan and Iraq, but now national attention has focused on a string of soldier deaths at home, including five in which foul play is suspected.

The Central Texas post is now at the center of military, congressional and independent investigations into its leaders and several of the soldiers’ deaths.

Two of the cases listed in the congressional investigation — those of Spc. Vanessa Guillen and Sgt. Elder Fernandes — involve reports of sexual assault and harassment, which sparked a separate investigation into how the post handles claims of sexual misconduct.

“Behind me is the sign reading ‘Fort Hood. The Great Place,’” U.S. Rep. Jackie Speier, D-Calif., said when her congressional delegation visited Killeen recently. “I don’t think any of us feel we can call it a great place right now.”

Speier, who kicked off a congressional investigation into Fort Hood on Sept. 18, read aloud several statements made by Fort Hood military families during the congressional visit:

—“Fort Hood is where careers go to die.”

—“I’m afraid I will find my husband hanging in the shower.”

Speier continued: “We have to ask the question, what has gone wrong?”

“One of the things that I believe has gone wrong is that the (U.S. Army) Criminal Investigation (Command) is ill equipped to do the job it’s charged to do,” she said.

While some in Congress are pointing fingers at Army leadership, others in Killeen say the recent deaths and reported misconduct at the post need to be put in proper perspective.

Killeen Police Chief Charles Kimble told The Austin American-Statesman that many in the media and the public often fail to consider Fort Hood’s population as a factor in crime.

According to Fort Hood officials, nearly 40,000 soldiers currently serve on post. However, those counts do not include their families, veterans or civilian workers who also have access to the base daily.

Those same soldiers often reside or utilize the city of Killeen located right outside Fort Hood’s gates, which nears 150,000 residents, according to Kimble.

The chief said: “What I deal in is facts. I don’t know the facts of all the incidents going on at Fort Hood, that’s not my business. But, I think it’s unfair to say ‘All these deaths.’ Have soldiers been killed? Absolutely. The reasons, I don’t know.”

Still, data collected by The New York Times show that more troops from Fort Hood have died by homicides on and off post since 2016 than have died in combat zones.

The Times found 159 noncombat deaths of Fort Hood soldiers since the beginning of 2016, which included seven homicides and 71 suicides.

These deaths confirm to many the issues reported at the post: high rates of suicides, homicides, dangerous training and sexual misconduct within the ranks.

One of those tragically affected by the reality of this data is that of Troyan, a licensed therapist out of Ohio.

Troyan is the mother of Pfc. Logan Castello, a Fort Hood soldier found dead in his off-post home last November. Authorities believe he killed himself.

Castello, who Troyan says had no previous signs of mental illness, began suffering from suicidal thoughts and depression once he was stationed in Killeen.

“I decided to start reaching out to the media now because there is such a spotlight on Fort Hood right now, but they aren’t talking about the suicides,” Troyan said. “I thought now is the time.”

Troyan said Army and local officials have yet to release any details in her son’s case, except the fact he died the same way as Fernandes: hanging.

“He should have been hospitalized,” Troyan said about her son. “Every day is a nightmare and I don’t want any other parent to live my life, so I just want Fort Hood to fix things. They didn’t help Logan, but they need to help the next kid.”

The national spotlight on Fort Hood began to intensify this year in late April after the disappearance of 20-year-old Army Spc. Vanessa Guillen of Houston. Her mother, Gloria, and sisters Mayra and Lupe began protesting outside the installation’s gates, demanding answers about her fate.

During one visit to Fort Hood, the three women were escorted onto the post by Spc. Aaron Robinson, whom authorities now believe killed and dismembered Guillen before disposing of her body in Bell County, where civilians found her remains near the Leon River, about 25 miles east of the post, in late June.

Robinson shot himself and died July 1 as authorities confronted him during their investigation.

But even as the Guillen family rallied support for Vanessa’s case, much of the public outside Killeen was still unaware that two other Fort Hood soldiers were killed a few weeks before her disappearance:

—On March 1, Spc. Shelby Jones was shot at a strip club in Killeen and then taken to a nearby convenience store where someone reported the shooting to authorities. He died at the scene as medics tried to save his life, authorities have said.

A few weeks after Guillen’s disappearance, the body of Pfc. Brandon Rosecrans of Fort Hood was found with gunshot wounds on a roadside about 20 miles east of Killeen.

By mid-June, in the midst of the Guillen, Jones, Delacruz and Rosecrans investigations, civilians discovered the remains of yet another soldier: Pvt. Gregory Wedel-Morales.

Wedel-Morales was listed as absent without leave in August 2019 after he disappeared just days before he was scheduled to finish his career in the military.

Wedel instead praises the Guillen family for pushing to get answers in the disappearances and eventual discoveries of both missing soldiers.

Authorities so far have announced arrests in the Guillen, Rosecrans and Delacruz cases.

The suspect in Jones’ case will not be prosecuted because the case involved self-defense, according to Killeen police.

Wedel-Morales’ case is still under investigation and no arrests have yet been made.

In addition to the soldiers at the center of the five homicide cases, the Army has released the names of five other soldiers at Fort Hood who have died stateside this year: Spc. Christopher Sawyer, Pvt. Mejhor Morta, Pvt. Corlton Chee, Spc. Francisco Gilberto Hernandez-Vargas, Sgt. Elder Fernandes.

Investigators have previously said they do not believe foul play is involved in their cases. They are among the seven suicides, eight deaths authorities have ruled as accidents, two illness-related deaths and five deaths that are still under investigation, according to representatives in Killeen on Sept. 18.

In comparison, Fort Bragg in North Carolina has more soldiers than Fort Hood, but reported only one homicide so far this year, according to the New York Times data.

As Fort Hood’s violent crime rate increases, so does the violence for the city it overshadows.

Kimble during a recent interview said any busy installation like Fort Hood or a growing city like Killeen will often see cases of petty crimes, violent crimes, drug use and suicides increase.

The chief added that Killeen also has seen a small rise in homicides, petty crimes and more as the result of an increase in people moving to the area.

The Statesman requested data from Killeen police listing the violent crimes involving people whose occupation or address is listed as Fort Hood over the past 10 years. However, that information was unavailable, police said, because addresses and occupations are not always collected within their database.

“In my option, the scrutiny they are getting is unfair,” Kimble said about Fort Hood.

“Unfortunately, incidents happen,” he continued. “People die in the city of Killeen (from) besides murder. People have accidents and fall out of trees and they have industrial accidents. But the media doesn’t report that, they generally deal with the crime.”

Still, the Secretary of the Army, Ryan McCarthy, in July admitted to Congress that Fort Hood was of concern.

McCarthy said Fort Hood’s rate of violent crimes was the highest in the U.S., adding that he hoped oversight investigations would help clarify whether the post has systemic problems within its ranks or if specific leadership or soldiers are to blame.

However, Fort Hood and Killeen’s history of violence dates back more than a decade.

Fort Hood and Killeen were the locations of three mass shootings in the past 30 years.

—In 1991, George Hennard drove a truck through a Luby’s Cafeteria in Killeen before fatally shooting 23 people and wounding 27 others.

—In 2009, Maj. Nidal Makik Hasan — a Fort Hood psychiatrist — killed 13 people and injured 32 others after opening fire on post.

—In 2014, Spc. Ivan A. Lopez killed three people and injuring 14 more during a Fort Hood shooting rampage before taking his own life.

“The numbers are high here,” McCarthy said, adding that officials have seen some of the Army’s highest number of cases of sexual assault, harassment and deaths at the post.

On Sept. 17, the day before representatives arrived to investigate the post, several Twitter accounts claimed that Fort Hood had another active shooter.

However, Fort Hood quickly released a statement saying that rumors were false. Officials further clarified that an active-duty soldier was arrested for threatening his commanders.

As the public awaits the completion of the nearly a dozen active investigations involving Fort Hood and its soldiers, changes have already begun regarding the post’s leadership.

The U.S. Army earlier this month announced the removal of the post’s top commander, Maj. Gen Scott Efflandt, who was supposed to take command of a division at Fort Bliss in El Paso before being denied that position as well.

Efflandt and the rest of the leadership at Fort Hood had been criticized by Guillen’s family and others for a lack of transparency surrounding the incidents at Fort Hood.

Public outcry over Guillen’s case propelled the deep dive into Fort Hood’s handling of sexual assault and harassment. The hashtag #IAmVanessaGuillen went viral on social media as hundreds of service members shared personal accounts of being subjected to sexual misconduct in the military.

A draft of the I Am Vanessa Guillen Act was officially introduced to Congress earlier this month. If signed into law, it would allow a third party to investigate and prosecute sexual misconduct claims within the military.