Fort Hood leaders have ‘blood on their hands’ in death of missing soldier, family attorney says

The leadership at the U.S. Army Fort Hood base in Texas created an environment that led to the death of Sgt. Elder Fernandes, a Brockton native who was missing for more than a week until he was found dead this week, the family's attorney said 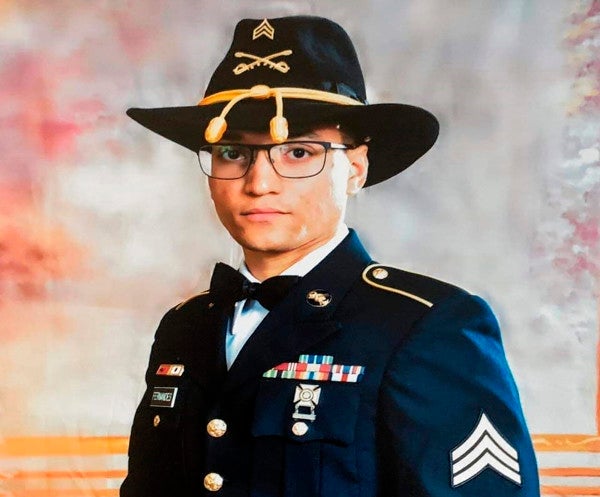 The leadership at the U.S. Army Fort Hood base in Texas created an environment that led to the death of Sgt. Elder Fernandes, a Brockton native who was missing for more than a week until he was found dead this week, the family's attorney said.

After Fernandes reported in May that he had been inappropriately touched by a male superior, he was transferred to another unit, and word spread within the new unit, leading to harassment, belittling, bullying and hazing, said attorney Natalie Khawam. Leadership at Fort Hood questioned Fernandes on whether the sexual assault even happened, she said.

“He was humiliated, he was embarrassed, he couldn't even tell his mom, he didn't want to tell anyone,” Khawam said Wednesday afternoon at a press conference in Tampa, Florida. “He was afraid. He was ashamed by this.”

On Tuesday evening, Fernandes was found hanging from a tree in Temple, Texas, about 28 miles from the Fort Hood base. He was found with his military ID and backpack, which contained his cellphone, wallet, money, car keys and personal hygiene items.

“They don't know what happened — whether it was suicide or whether murder. But I'm gonna tell you, what they did to him, the blood on their hands, it's a form of murder,” Khawam said, later adding that she thought it was “very suspicious” and “questionable” that Fernandes was found with several personal items on him and didn't leave a suicide note.

Fernandes' aunt, Isabel Fernandes, told The Enterprise Tuesday that her nephew was harassed once he was moved to his new unit.

“According to his friends, since that happened, they kept harassing him,” she said. “The person he accused was following him. They were hazing him, torturing him, making his life impossible.”

Elder Fernandes' leadership team at Fort Hood spoke Wednesday afternoon during a press conference from the base, expressing grief and “heartfelt sympathy” for his family, friends and fellow soldiers.

“The chain of command was very much invested in this trooper,” said Lt. Col. Justin M. Redfern, 553rd Combat Sustainment Support Battalion commander. “… It was a person that we felt was exemplary. As the behavior changed, the chain of command became very aware of the change in his behavior.”

Redfern said command staff noticed behavioral changes, without getting into specifics, in mid-March.

“The change in behavior preceded the unwanted touching, it preceded some of the other indicators that we saw,” he said.

Special Agent Damon Phelps said the investigation was completed “fairly recently” and that Elder Fernandes was made aware of the outcome.

“Our investigation has been completed and is with the command and their legal team with further action for further action, if warranted,” he said. “I can also share that the subject of the investigation took and passed a polygraph investigation and we found no witnesses that could corroborate Sgt. Fernandes' allegations. There was a thorough legal review and the allegations were unsubstantiated.”

But Khawam and family members say they believe Elder Fernandes' report of sexual abuse at the base.

“That is a bunch of lies and cover ups,” . “So how convenient is it that it took the army almost 4 months, with Elder alive to conclude the sexual harassment investigation and they didn't do it, but a day after he is found dead the result is not only concluded BUT inconclusive????”

Elder Fernandes' report follows allegations made by Spc. Vanessa Guillen, 20, who went missing from Fort Hood in April and whose body was found dismembered at the hands of a fellow soldier, who later killed himself, in July. Guillen reported being sexually harassed before she went missing.

“They're not dying from terrorism or ISIS, they're dying from sexual assault and sexual harassment when they report it, because the system is broken,” Khawam said. “And we're not going to continue to allow our soldiers to go about dying on our own turf.”

Guillen's sisters flew to Florida to visit with Khawam and attended her press conference Wednesday afternoon.

“People are asking — why didn't Vanessa report the sexual harassment? Why didn't she? Fernandes is an example that this not only happens to women, but to men,” said Lupe Guillen, the youngest sister of Vanessa Guillen. “He's an example that, if you speak up, if you report it, look what happens to you.”

Khawam, who says Elder Fernandes is the 13th Fort Hood soldier to vanish or be killed this year, is demanding a congressional investigation into the base.

And she has the support of several members of the congressional delegation from Massachusetts.

U.S. Rep. Stephen Lynch, a Democrat from South Boston, said an independent investigation is needed into the deaths of Elder Fernandes and others who have died in recent months at Fort Hood.

“The circumstances of yet another soldier's death at Fort Hood raises important questions that must be answered,” he said in a statement.

Markey said that when Elder Fernandes needed his country's support, it failed him.

“No parent or family should lose a son in this way,” he said in a statement. “The Army did not uphold its obligation to keep Sergeant Fernandes safe. There must be an independent investigation into Sergeant Fernandes's death so we can get a full accounting of what went so terribly wrong and hold accountable those who failed him.”

Fort Hood leaders said Elder Fernandes was dropped off at a residence in Killeen, Texas, on Aug. 17 after a week-stay at the Carl R. Darnall Army Medical Center. Isabel Fernandes said her nephew was hospitalized because he felt suicidal and promised to call his mother when he was released.

Col. Patrick Disney, commander of the 1st Cavalry Division Sustainment Brigade, said Elder Fernandes was dropped off at the home in Killeen that he asked to be taken to. He was last seen smoking a cigarette outside the residence, but never seen making it safely inside, he said.

Temple police, the lead agency because of where Elder Fernandes was located, said foul play is not suspected in his death.

Broadwater said he couldn't speak to each of the 13 instances of missing or dead soldiers that Khawam referenced, but he said “it hurts” to lose a teammate and friend.

“We're concerned about every soldier. That's the bottom line,” he said. “We are a team and we want to be the best team that we possibly can be, regardless of where we are, and ready to go at a moment's call. … We, as an organization, strive our best each and every day to make sure that we're taking care of and being the best leaders that we possibly can for our soldiers.”