"My hugs tell the soldiers that I appreciate what they're doing for us." 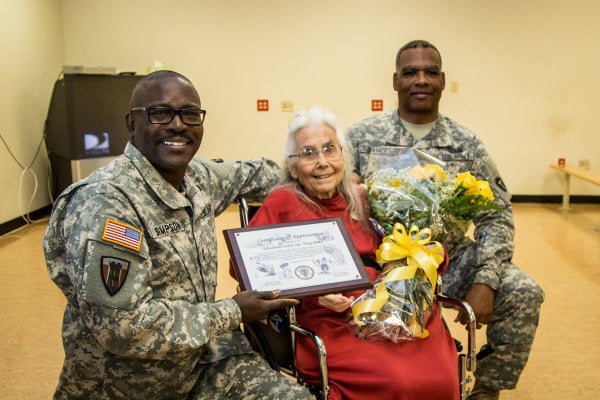 For 12 years, she was there for Fort Hood, Texas, troops going to and coming from deployments to combat zones with her engaging smile, words of comfort and, always, that great big hug — maybe a half million of them.

Now, an online petition has been started requesting the Defense Department to rename the place that served as her second home — the Fort Hood Arrival/Departure Airfield Control Group terminal (A/DACG) — for Elizabeth Corrine Laird, aka the “Hug Lady.”

The petition, launched last Saturday on the Change.org for-profit petition platform, had gathered more than 63,000 signatures through mid-morning Thursday.

Laird, an Air Force veteran who enlisted in 1950, was a volunteer with the Salvation Army and began coming to the A/DACG in 2003 during the big deployments to Iraq. She continued until her death in 2015 at age 83, after a long battle with breast cancer.

At first, she offered handshakes, but that quickly progressed to hugs from “Miss Elizabeth,” of Copperas Cove, Texas. She would also hand out cards printed with Psalm 91, which says in part: “Thou shalt not be afraid for the terror by night, nor for the arrow that flieth by day.”

Christopher Peckham, of Savannah, Georgia, started the petition. He posted to the Change.org site Monday, “I am honestly shocked that this took off so fast in the last 48 hours. I am going to do further research so we can make this happen!”

Some of those signing the petition also wrote that they had been hugged by Laird.

Jonathan Glessner of Somerset, Pennsylvania, wrote: “3 deployments from Ft. Hood and at least 6 hugs from her. My last deployment, she sat with me and some friends and told jokes and stories. She was truly a wonderful person.”

Matthew McCann of Maryneal, Texas, wrote: “She was there to say goodbye and give a hug when we left. She was a welcoming sight and a hug when we got home. She was a very special lady and she is sorely missed.”

A month before she died, Laird told Today.com about how she approached her mission.

“When they enter the room, they give me a hug, and then we talk about anything from their family to what it was like overseas or if they got a civilian job upon returning,” she said.

“My hugs tell the soldiers that I appreciate what they're doing for us,” she added.

Her funeral in Killeen, Texas, was attended by hundreds of troops, including generals, and Cecilia Abbott, wife of Texas Gov. Greg Abbott.

Former III Corps and Fort Hood Command Sgt. Maj. William “Joe” Gainey, who spoke at the funeral, admonished the troops in attendance, “You do not let her legacy die,” the Killeen Daily Herald reported.

Gainey said he was certain that Laird had taken her mission to another venue in heaven.

“Miss Elizabeth is there now, hugging my scouts,” he said, according to the Daily Herald.

SEE ALSO: Navy: Oh, by the way, we did get a request to hide the USS John S. McCain during Trump's visit

WATCH NEXT: Top 5 Bases That Should Be Deployments