After months without answers, investigators have now linked a Killeen, Texas couple to the May slaying of Pfc. Brandon Rosecrans 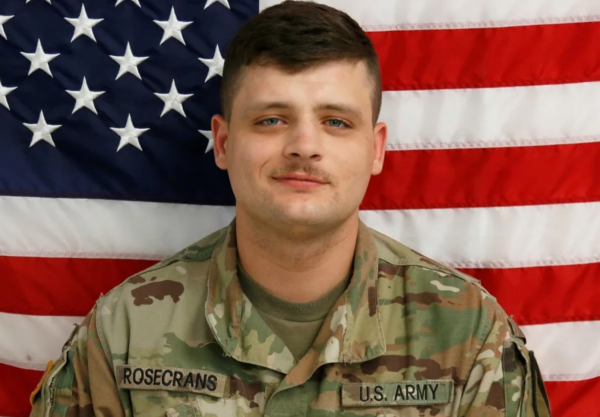 After months without answers, investigators have now linked a Killeen couple to the May slaying of Pfc. Brandon Rosecrans.

Newly released court documents reveal the Fort Hood soldier likely was shot multiple times on May 18 as he slept in the passenger seat of his car. Witnesses told investigators it's possible 28-year-old Brandon Olivares, who was charged with first degree felony murder last week, shot Rosecrans over a disagreement about the sale price of a gun.

Estrellita “Star” Falcon, 37, is accused of helping Olivares after the killing. Falcon is charged with unauthorized use of a vehicle and hindering apprehension and prosecution in the case. A search of public records shows she was in the Bell County jail Thursday on $100,000 bail.

The Austin American-Statesman reached out to attorneys for both Olivares and Falcon's for comment Friday, but did not immediately receive a response.

Rosencrans' body was reported discovered in a ditch on Fuller Lane in Harker Heights at 10:16 a.m. on May 18. Less than 15 minutes later, a resident of a nearby neighborhood reported a fire. Rosecrans' orange Jeep Renegade had been abandoned and set ablaze about 3 miles away, near FM 2410 and Cedar Knob Road in Bell County. Harker Heights firefighters found the vehicle engulfed beneath a water tower at the top of a hill near a wooded area, part of a residential neighborhood that is being cleared for new development.

After the fire was extinguished, investigators found a bullet hole in the back passenger-side door of the Jeep. Rosecrans was shot four times in the left side of his head and neck, and the Dallas County Medical Examiner found evidence to suggest the shots were made at close range. Investigators noted in an arrest affidavit that his wallet was missing.

An acquaintance told a detective on the case that Rosecrans and Olivares were likely together the night before, which is supported by the comparison of cell phone data, according to an arrest affidavit.

Olivares, who also is charged with unlawful possession of a gun by a felon, has a long criminal history that includes felony drug possession and theft, as well as multiple misdemeanor thefts and assaults, in Bell and Williamson counties. Olivares' last stint in prison ended in December with parole.

Officers initially arrested Olivares on a parole violation during the investigation into Rosecrans' death. A June arrest affidavit says he told detectives there is a picture of him holding a gun in his home on May 17 was because he was the middle man in a deal to sell the 9 mm Ruger for $300.

Olivares would change his story several times when questioned by detectives, according to a subsequent arrest affidavit, but in every interview he said Falcon had nothing to do with the shooting. However, the affidavit said, he did tell detectives she was in the Jeep at the time.

“Olivares told detectives he was in the Jeep Renegade with Rosecrans to and from San Antonio. Olivares told detectives he was driving when Rosecrans was shot, he was driving when Rosecrans' body was dumped on the side of the road, and he was in the vehicle when the Jeep Renegade was left at the top of the hill by the water tower,” the affidavit says. And while Olivares admitted to possessing the gun used to shoot Rosecrans the night before, the document says, he pointed to another man as the shooter.

Related: Army Secretary: Murder and sexual assault numbers at Fort Hood are higher 'in most cases' than anywhere else in the service

GPS data show Rosecrans and Olivares were at the same locations on the morning of May 18, according to Olivares' arrest affidavit. The data show Olivares' phone was also at the site where Rosecrans body was found and where the Jeep was burned.

Detectives said cellular data of the man Olivares implicated in the crime show he was in Killeen at the time.

On Aug. 4, investigators interviewed the man Olivares accused of killing Rosecrans, along with that man's girlfriend. The couple, who the American-Statesman is not naming because authorities have not charged them with a crime, told officers that Olivares and Falcon visited their home some time after the homicide and appeared paranoid and nervous.

According to the affidavit, Olivares was scared to shoot the soldier, Falcon said, so he waited until Rosecrans fell asleep. Falcon, the girlfriend said, called Olivares a “punk.”

Investigators said officers found the front passenger seat of the Jeep fully reclined, which would match with the statement that Rosecrans was asleep.

During a search of the property where Olivares and Falcon live, investigators found “a firepit in the yard that contained … a burned Jeep key,” according to his arrest affidavit. “The keys to the Jeep Renegade owned by Rosecrans were not found on his body or in or around the burned vehicle.”

Olivares and Falcon — whose criminal record includes theft, burglary of a home and forgery — are the second Killeen couple accused in the killings Fort Hood soldiers in recent months.

Spc. Aaron David Robinson, along with his girlfriend Cecily Aguilar, were linked to the slaying of Spc. Vanessa Guillen.

Authorities say Robinson — who reportedly died of a self-inflicted gunshot wound on July 1 as local police officers approached him for questioning — killed Guillen with a hammer on April 22 at Fort Hood. Aguilar is charged with helping Robinson dismember and dispose of Guillen's remains near the Leon River in Bell County, about 20 miles from the Army post.

Aguilar has pleaded not guilty. Her trial is expected to start Sept. 28.