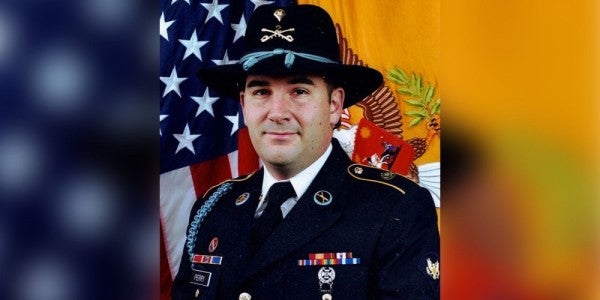 A lawyer for the man accused of fatally shooting Black Lives Matter protester Garrett Foster in Texas has identified his client as an active-duty sergeant in the Army, and released a statement saying the shooting was an act of self-defense.

In a statement, Broden said Perry had been working for a ride-share service when he turned right onto Congress Avenue and encountered the protesters. Foster, who was seen carrying an “AK-47-style” assault rifle, motioned to Perry to roll down his driver's-side window, then raised his rifle at him, according to Broden's statement.

Related: An Air Force vet brought an assault rifle to a protest in Austin. Then he was shot dead

The Washington Post first published the statement in full. The law firm did not immediately respond to Military.com's request for additional comment. Law enforcement officials have not publicly identified the shooter in the case.

“It was only then that Sgt. Perry, who carried a handgun in his car for his own protection while driving strangers in the ride share program, fired on the person to protect his own life,” the statement continues.

Army Lt. Col. Chris Brautigam, a spokesman for 1st Cavalry Division, out of Fort Hood, Texas, confirmed to Military.com that Perry was an active-duty sergeant assigned to 1st Cav.

Brautigam did not confirm any additional career specifics for Perry, but Broden's statement said he had served honorably for eight years, deployed once to Afghanistan and “has been the recipient of numerous [A]rmy awards and commendations.”

Foster also had a history of service; he was a former Air Force flight mechanic who received an early discharge to provide full-time care to his fiancee, Whitney Mitchell, a quadruple amputee.

There is some disagreement among witnesses regarding what took place in the confrontation. Witnesses told the Austin American-Statesman that Perry's car had appeared to accelerate into the crowd, and also that Foster had his weapon pointed down.

“In a Facebook Live video of the hours-long march, a car honking is heard before two volleys of gunshots, a total of eight rounds, were unleashed. Several screaming protesters immediately took cover,” according to the American-Statesman report.

The statement from Perry's attorney offers a different view.

“Immediately after Sgt. Perry fired on the individual who raised the assault rifle toward him, a member of the crowd began firing on Sgt. Perry's vehicle,” it says. “Sgt. Perry drove to safety and immediately called the police. He waited for the police to arrive and fully cooperated with the police following the shooting and he continues to do so.”

Austin Police Chief Brian Manley confirmed to reporters on Monday that the driver of the car had called 911 and turned himself in.

Perry was initially taken into police custody but later released. Another individual identified as shooting at Perry's vehicle was also questioned and released, Manley said at the time, according to a Washington Post report. Both, he noted, had a license to carry.

“Sgt. Perry and his family deeply sympathize with the loss and grief being experienced by Mr. Foster's family. Sgt. Perry is devastated by what happened. Nevertheless, that does not change facts,” according to the statement. “The simple fact is that Sgt. Perry reasonably perceived a threat to his life when … We simply ask that anybody who might want to criticize Sgt. Perry's actions, picture themselves trapped in a car as a masked stranger raises an assault rifle in their direction and reflect upon what they might have done if faced with the split second decision faced by Sgt. Perry that evening.”