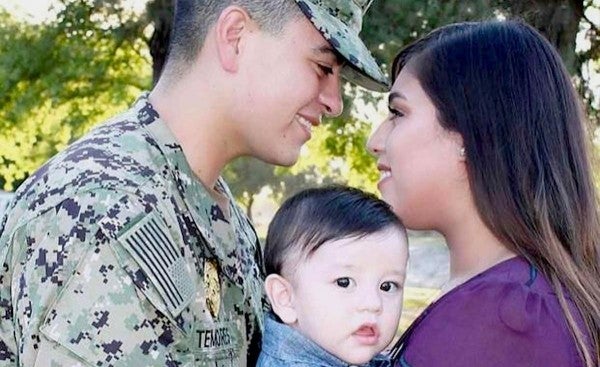 “He just he just had that personality that you can go up to him and talk to him about anything. It was goofy and weird, and he always had jokes,” said Petty Officer 3rd Class Derek Lopez, a fellow base patrolman. “Sometimes he'd make you cry from laughter and other times you'd just want to cringe because of how dumb his joke was. But that's what made him more approachable and easy to be around.”

Temores' family and hundreds of base personnel gathered Thursday at a theater on Little Creek to pay tribute to the sacrifice he made and to remember what made him stand out for those who knew him well.

“He was a brother to all of us,” Lopez said, choking back tears. “He lifted every spirit and room he entered.”

Temores' family was awarded the Law Enforcement Medal of Honor for the actions he took. A plaque featuring Temores will be installed on Little Creek's “Hero's Circle Nature Trail,” which tells the story of people based at Little Creek who died in the line of duty, such as Navy SEALs.

“He bravely ran towards the fight, with courage and honor, so that we can continue to enjoy each and every day of our own lives,” said Capt. Joey Frantzen, the base commander.

“I often think about my family and the families of all those that live on base. And I know that Petty Officer Temores' actions that night saved countless lives. I will never be able to prove that absolute truth. But I know it in my heart. I believe had he not stopped that maniac, he would have taken other innocent lives.”

Authorities have provided few details about what happened, but court records show that a Chevrolet pickup truck was going 81 mph when it struck head-on into Temores' patrol car.

Nathaniel Lee Campbell was driving more than three times the posted speed limit — 25 mph — at the time of the head-on collision. Campbell, 38, of Shenandoah, has been charged with involuntary manslaughter.

The Navy said he drove the wrong way through an exit lane to enter the base at about 7:30 p.m.

Frantzen said Campbell could have struck and killed any number of people had Temores not stopped him. The loss was a personal one for Frantzen, too.

He fondly recalls seeing Temores at the entry control point when he would drive onto base. Without fail, Temores would ask Frantzen how his day was going.

“He would just beam with this huge smile,” he said. “It didn't matter how bad your day was. You just left with 'That kid's got it.'”