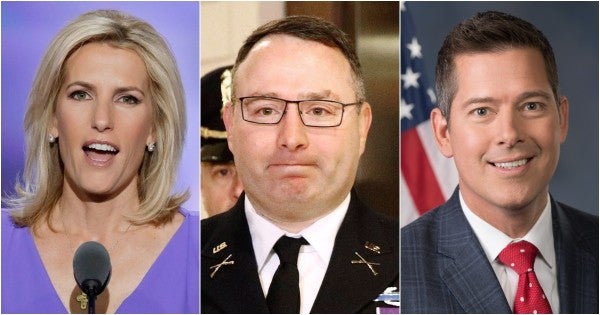 Two Fox News hosts and a CNN analyst are facing criticism from reporters and media pundits after suggesting — without evidence — that a decorated war veteran and a White House national security official could be a double-agent.

Lt. Col. Alexander Vindman, a member of the White House National Security Council who was on the July call President Donald Trump had with Ukrainian president Volodymyr Zelensky, is on Capitol Hill Tuesday testifying as part of the House's impeachment inquiry.

According to his opening remarks, which were made public Monday evening, Vindman was expected to testify that he twice reported concerns about Trump's attempts to pressure Ukraine into publicly opening an investigation into the Bidens and the gas company Burisma, acting out of a “sense of duty.”

“I did not think it was proper to demand that a foreign government investigate a U.S. citizen, and I was worried about the implications for the U.S. government's support of Ukraine,” Vindman wrote in his opening statement.

But on Fox News and CNN, hosts and analysis supportive of Trump have pushed an unsupported narrative: That Vindman, a Ukrainian refugee who immigrated to the U.S. when he was a child might actually be a double-agent.

During her Fox News show Monday night, Laura Ingraham focused on a small part of a New York Times story that outlined Vindman's background as an immigrant, pointing out he speaks fluent Ukrainian and Russian but that in his discussions with Ukrainian officials, they “typically communicated in English.”

“Here we have a U.S. national security official who is advising Ukraine, while working inside the White House, apparently against the President's interest, and usually, they spoke in English,” Ingraham said to one of her guests John Yoo. “Isn't that kind of an interesting angle on this story?!”

“You know, some people might call that espionage,” Yoo suggested.

The narrative also made it onto the network's popular morning show Fox & Friends, with co-host Brian Kilmeade noting that Vindman had “an affinity to the Ukrainian people” and that “he tends to feel simpatico with Ukraine.”

The morning after Laura Ingraham suggested Alexander Vindman is a hostile double agent, Brian Kilmeade simply notes that Vindman "is from the Soviet Union, he emigrated here, and has an affinity to the Ukrainian people." pic.twitter.com/0TOKeWQP6j

“I don't know that he's concerned about American policy, but his main mission was to make sure that the Ukraine got those weapons,” Duffy said. “I understand that. We all have an affinity to our homeland where we came from.”

As the New York Times reported, Vindman is a scholar, diplomat, a decorated Army veteran awarded the Purple Heart, and a Harvard-educated Ukraine expert assigned by the Trump administration to serve on the National Security Council.

The focus on Vindman's heritage, coming from Trump supporters with the apparent intent of diminishing the Iraq war veteran's credibility as a witness, drew swift condemnation, including from at least one prominent Republican lawmaker.

“We need to show that we are better than that as a nation,” Cheney told reporters during a Tuesday press conference.

“As a reporter, I wonder is this really the line the Republicans are going to take, conservative critics of this impeachment inquiry, that someone who's an immigrant and has served this country is now a questionable person, without any kind of evidence to make this case?” Washington Post reporter Robert Costa asked on MSNBC Tuesday morning.

Neither Fox News nor CNN immediately responded to requests for comment.

On Twitter Tuesday morning, Trump baselessly described Vindman, who remains a member of the president's National Security Council, as a “Never Trumper.”