A knife-wielding attacker shouting "Allahu Akbar" beheaded a woman and killed two other people at a church in the French city of Nice on Thursday, while a gunman was shot dead by police in a separate incident 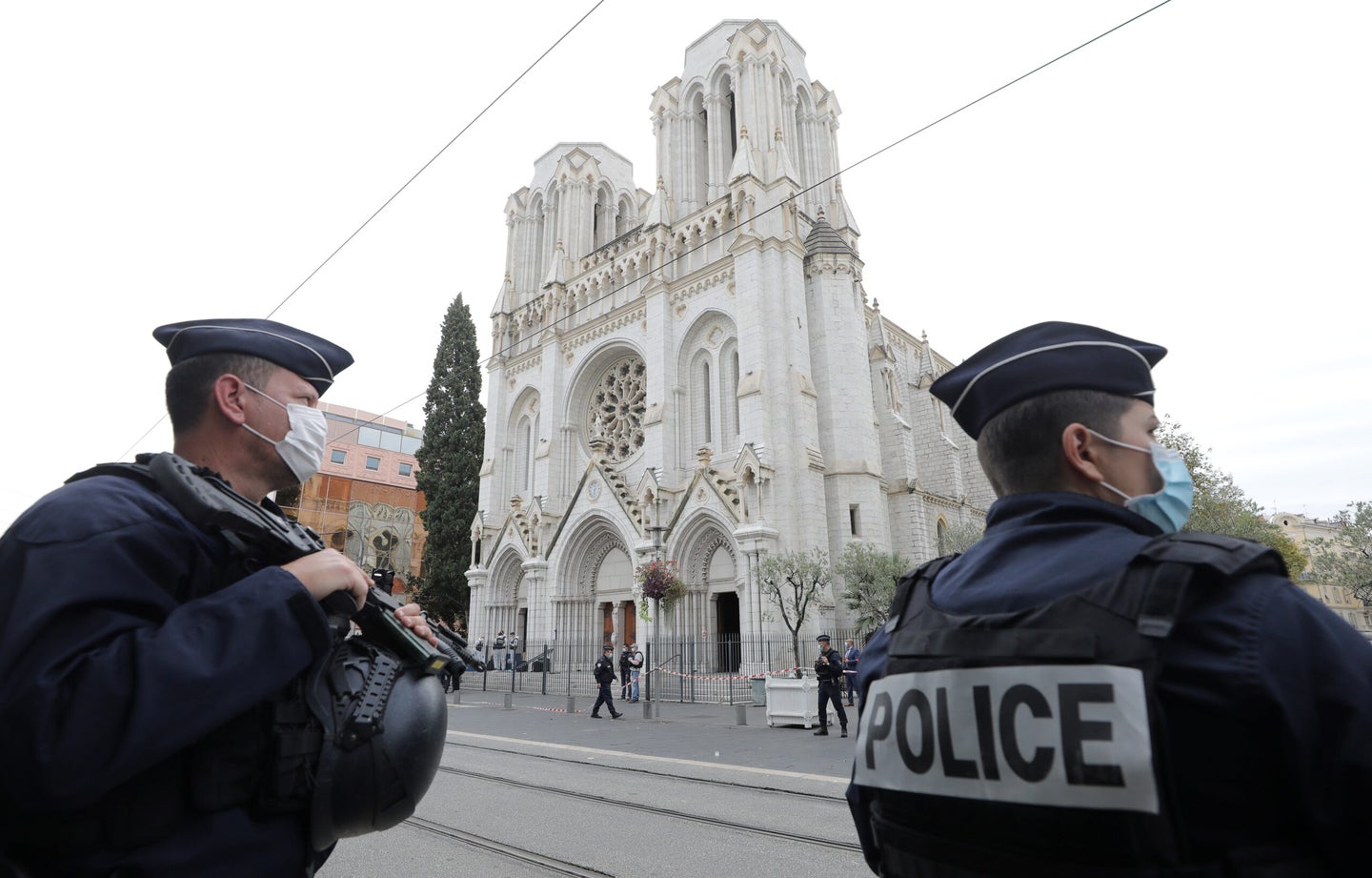 NICE, France (Reuters) – A knife-wielding attacker shouting “Allahu Akbar” beheaded a woman and killed two other people at a church in the French city of Nice on Thursday, while a gunman was shot dead by police in a separate incident.

Within hours of the Nice attack, police killed a man who had threatened passersby with a handgun in Montfavet, near the southern French city of Avignon. He was also shouting “Allahu Akbar” (God is Greatest), according to radio station Europe 1.

In Saudi Arabia, meanwhile, state television reported that a Saudi man had been arrested in the Red Sea city of Jeddah after attacking and injuring a guard at the French consulate there. The French Embassy said he was in hospital after a knife attack and his life was not in danger.

Nice’s mayor, Christian Estrosi, said the attack in his city had happened in or near Notre Dame church and was similar to the beheading earlier this month near Paris of teacher Samuel Paty, who had used cartoons of the Prophet Mohammad in a civics class.

Thursday’s attacks, on the birthday of the Prophet Mohammad, came at a time of growing Muslim anger at France’s defence of the right to publish the cartoons, and protesters have denounced France in street rallies in several Muslim-majority countries.

After the Nice attack, Prime Minister Jean Castex raised France’s security alert to its highest level and said the government’s response would be firm and implacable.

Estrosi said the Nice attacker had repeatedly shouted the phrase “Allahu Akbar” even being detained by police.

“The suspected knife attacker was shot by police while being detained. He is on his way to hospital, he is alive,” Estrosi told reporters.

“Enough is enough,” he added. “It’s time now for France to exonerate itself from the laws of peace in order to definitively wipe out Islamo-fascism from our territory.”

Reuters journalists at the scene said police armed with automatic weapons had put up a security cordon around the church, which is on Nice’s Jean Medecin avenue, the French Riviera city’s main shopping thoroughfare. Ambulances and fire service vehicles were also at the scene.

The attack was also condemned by the European Commission, the Vatican, Britain, the Netherlands, Italy, Spain and Turkey, whose President Tayyip Erdogan earlier this week slammed France over displays of the Prophet Mohammad.

President Emmanuel Macron is due to visit Nice, Estrosi said.

In Paris, lawmakers in the National Assembly observed a minute’s silence in solidarity with the victims. The mayor of Paris, Anne Hidalgo, said the people of Nice “can count on the support of the city of Paris and of Parisians”.

Police said three people were confirmed to have died in the attack and several were injured. The French anti-terrorist prosecutor’s department said it had been asked to investigate.

A police source said a woman was decapitated. French far-right politician Marine Le Pen also spoke of a decapitation having occurred in the attack.

A representative of the French Council for the Muslim Faith strongly condemned the attack. “As a sign of mourning and solidarity with the victims and their loved ones, I call on all Muslims in France to cancel all the celebrations of the holiday of Mawlid.”

The holiday is the birthday of the Prophet Mohammad, celebrated on Thursday.

Egypt’s al-Azhar, the 1,000-year-old seat of Sunni Muslim learning, condemned the incident as a “hateful terrorist attack” and warned against “violent and hate speech” in a reference to the display of images in France of the Prophet Mohammad.

Estrosi said the victims had been killed in a “horrible way”.

“The methods match, without doubt, those used against the brave teacher in Conflans Sainte Honorine, Samuel Paty,” he said, referring to the teacher beheaded earlier this month in an attack in a Paris suburb.

France is still reeling from that killing by a man of Chechen origin, who said he wanted to punish Paty for showing pupils cartoons of the Prophet Mohammad to his pupils.

It was not immediately clear if Thursday’s attack was connected to the cartoons, which Muslims consider blasphemous.

In a comment on recent beheadings in France, the Russian government said on Thursday it was unacceptable to kill people, but also wrong to insult the feelings of religious believers.

France, with Europe’s largest Muslim community, has suffered a string of Islamist militant attacks in recent years, including bombings and shootings in 2015 in Paris that killed 130 people and a 2016 attack in Nice in which a militant drove a truck through a seafront crowd celebrating Bastille Day, killing 86.

France
How The Other Half Fights
news
Terrorism
violent extremism