This article by Hope Hodge Seck originally appeared on Military.com, the premier source of information for the military and veteran community.... 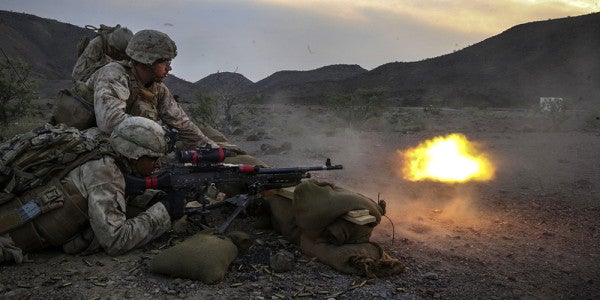 This article by Hope Hodge Seck originally appeared on Military.com, the premier source of information for the military and veteran community.

The infantry unit of the future is sophisticated, with electronic warfare capabilities, robust intelligence and reconnaissance capabilities, and the ability to conduct local influence operations.

And the future is now.

When Marine Corps Commandant Gen. Robert Neller named an experimental infantry unit, 3rd Battalion, 5th Marines, in early 2016, much of the concept was built around hardware: testing out unmanned systems, vehicles, and weapons for use by the force. But, more than a year later, many of the recommendations coming out of the experiment have to do with enhancing the skill set inherent in the infantry battalion, not just the gear the unit carries.

Brig. Gen. Christian Wortman, the commanding general of Marine Corps Warfighting Lab, told reporters at the Pentagon Tuesday that some new capabilities expected to arrive for infantry battalions include an increased sniper platoon, to enhance surveillance and reconnaissance; tools to manage and monitor the signature the unit creates; and new positions focused on information and effective communication with adversaries and local populations downrange.

“At the battalion level, we gave some tools to support military information operations, to be able to support our influence efforts in a contested and to work to gain the support of local populations and discourage the efforts of potential adversary forces,” Wortman said.

Military influence support operations, or MISO, is a field better known to the public by a name the Army still uses: psychological operations, or PSYOP.

The terms cover a range of activities from direct communication with local civilians by use of leaflet or radio broadcast, to deception strategies aimed at the enemy — all intended to influence emotions, motives, and decision-making in favor of a particular objective.

“At the battalion level, we want them to be part of the equation for effectively engaging local populations, engaging adversary forces,” Wortman told Military.com.

“The means of delivery have changed a lot. Being able to reach people on their phones with texts or other types of capabilities to deliver messages, those are the types of tools that we want to be able to provide down to the battalion level,” he continued. “It just hasn't been part of the battalion fight up to this point.”

In experimentation, the unit was given “enhanced situational awareness tools,” including radios that can interface with tablets equipped with battlefield visualization software designed to enhance awareness of what's happening in the region with friendly forces, enemies, and any local civilian population, Wortman said.

Recommendations for unit improvement after the experimentation included adding an information environment operations officer and an information management officer, as well as an additional forward air controller at the battalion level.

As for the addition of more scout snipers, that will also improve battlefield awareness, Wortman said. He said the Marines are looking to add eight additional snipers to the existing scout sniper platoons inside infantry battalions.

“[It's] just recognizing the demand of being able to operate with high levels of awareness of what our adversary might be doing and then to be able to engage with precision in a complex environment that potentially involves civilians,” Wortman said. “We recognize that scout snipers enable us to achieve a lot of that.”

All of these changes in some way reinforce a key takeaway of the Marines' infantry experiment: that the service is in “an age of strategic competition,” requiring key capability changes to better accomplish the mission.

“We're locked in to a competition for the support of the local population. And in a counterinsurgency kind of environment, there's a premium on gaining that kind of support,” Wortman said. “But even in an age of strategic competition, we want to ensure that we've got the right tools to reach out to civilian populations so they understand the nature of our operations … So we want to have tools to support the strategic message at the tactical edge so that we're able to reinforce that and communicate that effectively.”