Navy SEALs who were never called to testify in the war crimes trial of Chief Petty Officer Eddie Gallagher told naval criminal investigators about behavior they witnessed, including the alleged stabbing of a wounded ISIS fighter that led to murder charges against Gallagher 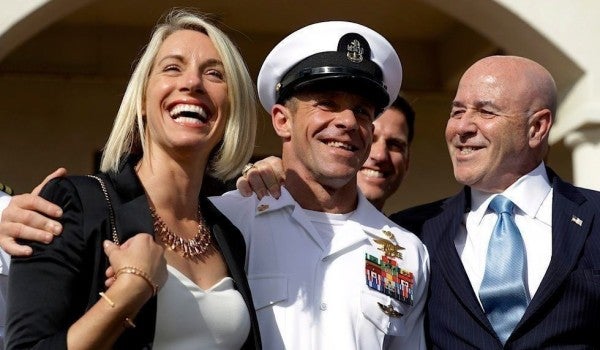 Navy SEALs who were never called to testify in the war crimes trial of Chief Petty Officer Eddie Gallagher told naval criminal investigators about behavior they witnessed, including the alleged stabbing of a wounded ISIS fighter that led to murder charges against Gallagher.

The two SEALs were granted immunity to testify in the trial this past summer, but were never called to the stand.

Their interviews with criminal investigators will be available for streaming today on Hulu, on “The Weekly” from The New York Times. It will be broadcast on FX on Sunday.

The Naval Criminal Investigative Service conducted the SEAL interviews more than a year before the San Diego court-martial of Gallagher, who was charged and acquitted of several war crimes, including murder.

One of those SEALs — Petty Officer 2nd Class Ivan Villanueva — told investigators he witnessed the alleged stabbing of a wounded ISIS fighter that led to murder charges against Gallagher.

“I saw it happen,” Villanueva says during his interview.

The Navy has never explained why Villanueva was not called to testify at Gallagher's court-martial and did not respond to inquiries on Thursday.

The case created a national firestorm as President Donald Trump intervened again and again on Gallagher's behalf — and culminated this week with a visit by Gallagher and his wife, Andrea, with Trump and First Lady Melania Trump at the president's Mar-a-Lago estate in Florida.

Trump and other supporters say “warfighters” don't need their actions questioned by bureaucrats in the military.

While the accounts of the witnesses aren't new — the Union-Tribune published a summary of their stories on the eve of trial — hearing those accounts from the witnesses themselves is. The episode, titled “The Gallagher Effect,” presents these SEALs' stories in their own words and voices, framing their actions as courageously going against the traditional brotherhood of the Navy SEALs.

In separate interviews, the SEALs tell NCIS agents that Gallagher behaved like a “psychopath” during their 2017 deployment to Mosul, Iraq, where the platoon took on the Islamic State. One by one, his men tell NCIS that their platoon served as Gallagher's “personal sniper escort” and that the chief was “medal chasing.”

They also describe his actions during the deployment as war crimes.

These interviews led to the murder charges against Gallagher in 2019 — charges the SEAL denied. He was found not guilty in July of murdering the wounded fighter and shooting civilians.

Gallagher says his men made up the accusations because they were unhappy with his leadership style.

In a written statement sent via his attorney, Gallagher said, “My first reaction to seeing the videos was surprise and disgust that they would make up blatant lies about me, but I quickly realized that they were scared that the truth would come out of how cowardly they acted on deployment. Soon after I got to the brig at Miramar, one of these guys came to visit me and apologize for what they did but that they had to stick with the fake stories or be charged with making false statements.”

Gallagher's attorney, Tim Parlatore, told the Union-Tribune in an interview Thursday that there was nothing new in the videos and predicted The New York Times would edit and cherry-pick which parts of the statements to air.

“You're never going to understand these interviews without a trained criminal investigator looking at it,” Parlatore said. “Those videos were so helpful to me — they gave me a road map to acquittal.”

According to Parlatore, the full videos revealed flawed NCIS interrogations that were key to his trial preparation.

“No question, these videos demonstrate all of the failings of the investigation,” Parlatore said. “They were fantastic — very rarely in a case do you have something as great as these videos to help you prepare.”

One witness in the videos is Corey Scott, a petty officer 1st class who, along with Gallagher, was treating the wounded ISIS fighter's injuries after he was injured in an airstrike. Part of the medical treatment involved inserting a breathing tube into the man to treat what witnesses said was “blast lung.”

Scott told NCIS in his interview that he saw Gallagher stab the fighter multiple times and that he remained with the man until he died. At trial, however, Scott told a different version of his story — one in which he says he killed the fighter after Gallagher stabbed him just once.

In court, Scott said that after Gallagher stabbed the fighter, Scott suffocated him by covering his breathing tube.

Audio of Scott's court-martial testimony — and his startling admission — is included in “The Weekly.”

Parlatore said he knew Scott wasn't telling the whole story during a preliminary interview when Scott told him the fighter had suffocated.

“His lawyer shut me down (during that interview),” Parlatore said. “He wouldn't let me ask (more questions) until they worked out the immunity issue.”

Also included in the videos are statements by Villanueva and another witness, Petty Officer 1st Class Joe Arrington. Both were granted immunity to testify but prosecutors never called them to the stand.

Arrington, Villanueva and Scott all share the same attorney, Brian Ferguson. After Scott's testimony, prosecutors appeared to change course in the trial and did not call Villanueva or Arrington to the stand.

A Navy prosecutor at the time declined to answer a Union-Tribune question about why Villanueva — who told investigators he saw the stabbing — was never called to testify.

The case gained renewed importance in November, when President Donald Trump intervened and granted Gallagher clemency, restoring his rank to chief petty officer and undoing a rank reduction ordered by a military jury.

Although the jury acquitted Gallagher of the most serious charges against him, it found him guilty of posing for a photo with the corpse of an ISIS fighter he was accused of killing.

After Trump restored Gallagher's rank, the Navy moved to strip Gallagher of his SEAL Trident and boot him from the elite community. The president pushed back in Gallagher's favor and, before all was said and done, Navy Secretary Richard Spencer lost his job over his handling of the case.

Gallagher retired from the Navy in November.

“The Weekly” also delves into Gallagher's activity on social media after he was accused. Gallagher has lashed out at his perceived enemies, including Navy prosecutors, Navy Special Warfare Commander Rear Adm. Collin Green and the witnesses who turned him in, who he and some supporters refer to as the “Mean Girls.”

One SEAL who testified against Gallagher told the Union-Tribune Tuesday he is frustrated that Rep. Duncan Hunter, R-Alpine, and Trump got involved in the case.

“When you look at politicians getting involved in military justice — whether it's a congressman from San Diego or the president — with their involvement, it isn't justice,” the witness said. “It's political, when shooting civilians and executing prisoners shouldn't be.”

The witness spoke to the Union-Tribune on condition of anonymity, saying he still fears for his safety.