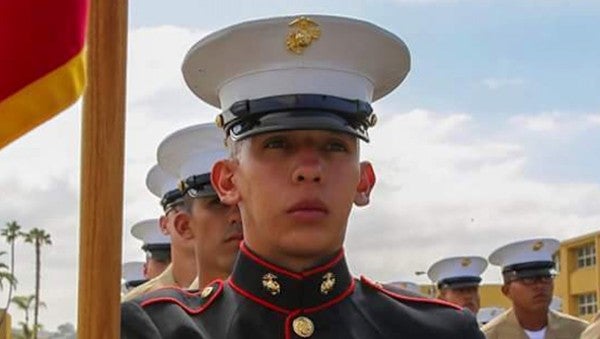 Two gang members were sentenced Monday for the senseless slaying of a 19-year-old Marine who saw them trying to break into a car in Los Angeles and confronted them, prosecutors said.

The men shot and killed Lance Cpl. Carlos Segovia Lopez on Sept. 16, 2016, shortly after he left his girlfriend's house while on leave from Camp Pendleton, a jury found.

Aguilar approached Segovia at Rio's direction and shot him once in the head as the Marine was sitting in his car, according to court testimony.

Segovia was placed on life support with little brain function and died three days later at a hospital.

A third defendant, Ricky Valente, 21, pleaded no contest to one count of accessory after the fact in June 2018. He was later placed on three years of formal probation under the terms of a negotiated plea agreement.

Aguilar and Rios were known gang members, according to testimony.

All three defendants were residents of the neighborhood where the shooting occurred.

“They shot a Marine. They shot a community leader,” family friend Claudia Perez previously told the Los Angeles Times. “It was not gang-on-gang violence like you normally see on South L.A. streets. He left a base to see his family and was murdered in the streets.”

Mom Sandra Lopez told told NBC in Los Angeles that her son's death was a “big loss to the USA.”