An Air Force vet brought an assault rifle to a protest in Austin. Then he was shot dead

Garrett Foster, who was shot to death during a downtown Austin protest Saturday night, was remembered as a man dedicated to exercising his Second Amendment rights, stamping out racial injustice and caring for his fiancé, according to family and friends. 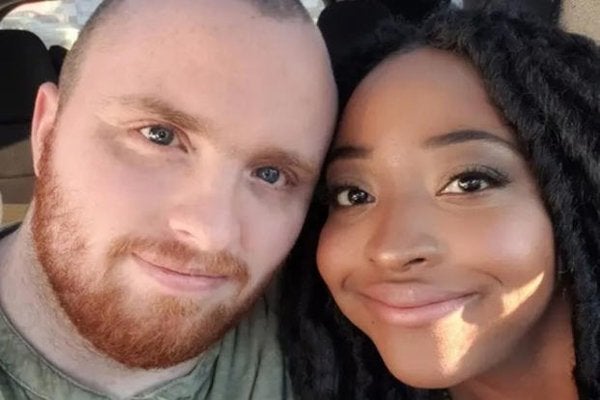 AUSTIN, Texas — Garrett Foster, who was shot to death during a downtown Austin protest Saturday night, was remembered as a man dedicated to exercising his Second Amendment rights, stamping out racial injustice and caring for his fiancé, according to family and friends.

The incident leading up to the 28-year-old’s death began about 9:50 p.m. when a driver on Fourth Street honked his horn and turned right onto Congress Avenue where there was a crowd of protesters, according to Austin Police Chief Brian Manley on Sunday. Several protesters — including Foster, who was holding an assault rifle — approached the car, Manley said. Manley said the driver reported Garrett had pointed his assault weapon at him. The driver then pointed his handgun outside the window and fired multiple shots and then drove away, Manley said.

Someone in the crowd, who was not Foster, opened fire on the car as it drove away, Manley said.

First responders performed CPR on Foster, but he died at Dell Seton Medical Center less than an hour after the shooting, officials said.

No other injuries were reported.

Austin police said they detained the person who fired the fatal shots and he cooperated with investigators. He has been released, along with the second shooter, Manley said.

Witnesses who attended the protest told the Statesman that the driver had appeared to drive into the crowd and came to a stop when it hit an orange barrier. They also said Garrett had his weapon pointed down.

Manley would not say why the driver was originally at the scene of the protest.

In a Facebook Live video of the hourslong march, a car honking is heard before two volleys of gunshots, a total of eight rounds, were unleashed. Several screaming protesters immediately took cover.

Manley is asking for the public’s help with providing footage or accounts of the incident by calling the Crime Stoppers anonymous tip line at (512) 472-8477 or emailing homicide.apd@austintexas.gov.

“We are heartbroken over the loss of Mr. Foster last night. It is actively being investigated … in conjunction with the Travis County District Attorney’s Office,” Manley said.

Foster grew up in Plano and had been living in Austin with his fiancé, Whitney Mitchell, for about two years. Mitchell was at the protest in a wheelchair with him at the time, and the two had been to such events in downtown Austin against police violence for months, according to protesters and Foster’s family.

Mitchell is Black and Foster is white, and issues of racial injustice were incredibly important to him, his family said.

“They’ve experienced so much hate just for their relationship in general,” said his sister, Anna Mayo. “From day one, he’s fought to end that.”

Mitchell and Foster started dating about a decade ago. Foster enlisted in the U.S. Air Force in his late teens and had to leave for boot camp two months after Mitchell had all four of her limbs amputated after she developed a medical condition which led to sepsis.

Foster worked in the Air Force as a flight mechanic until he was 19, when he was discharged to be Mitchell’s full-time caretaker, his family said.

“That time when he was gone was so detrimental to both of them, because they were very much in love, and he had cared for her so well,” said his aunt Karen Sourber. “He’s been her primary caretaker ever since. He just loved her unconditionally and took care of everything.”

Protesters said they got to know the couple well throughout the many protests this summer.

“A lot of us haven’t slept — I haven’t been asleep,” protester Julian Salazar said Sunday morning, after he witnessed the shooting. “It’s been heartbreaking. A lot of us are angry, depressed, sad to learn that his (fiancé) now is going to be struggling. The one person she had here in Austin, who was always going to be there for her, is now gone.”

Foster often talked to protesters about his rifle, which he brought to the protests, Salazar said. Mayo said Second Amendment rights were important to him.

“My brother would have never, ever pointed a gun at somebody,” Mayo said. “He always carried his guns with him. He had a license to carry in Texas — we’re an open carry state. He always would exercise his right to carry, but he would never threaten somebody. He was one of the most kind-hearted people — that was the whole reason he was out there.”

As of 6 p.m. Sunday, a GoFundMe for Foster’s funeral expenses and for Mitchell’s care had raised over $90,000.

By early Sunday morning, about 50 protesters had returned to Austin Police Department headquarters, where protesters had convened hours earlier. Mitchell joined the protesters and was visibly grieving. Protesters surrounded her to give her their condolences while chanting Foster’s name.

“It made our message that much more meaningful for us. … We’ve got a brother that was stripped from us,” a protester told the Statesman outside of police headquarters; he declined to provide his full name, as many protesters have done, citing fear of retaliation. “The fact that you can go from being five feet away from this man at the beginning of the march, him marching, him yelling, him chanting to being lifeless. It’s a messed-up reality.”

Protesters have taken to Austin streets regularly over the last several weeks to oppose what they say is local police brutality against people of color.

Among recent cases of Austin officers using force include Michael Ramos, a 42-year-old half Black and half Hispanic man, who was shot and killed by Austin police as he pulled out of an apartment complex parking lot on South Pleasant Valley Road in April.

Javier Ambler II died last year in North Austin after Williamson County sheriff’s deputies used a stun gun on him despite his calling out to officers that he had congestive heart failure and couldn’t breathe.

Outgoing Travis County District Attorney Margaret Moore said Wednesday that she was going to forgo taking Ramos and Amblers’ cases to a grand jury, instead leaving that decision to the next district attorney. Moore had previously planned to present these cases to a special grand jury next month.

Protesters out of police headquarters on Sunday added Garrett’s names to the list of people they say deserve justice.