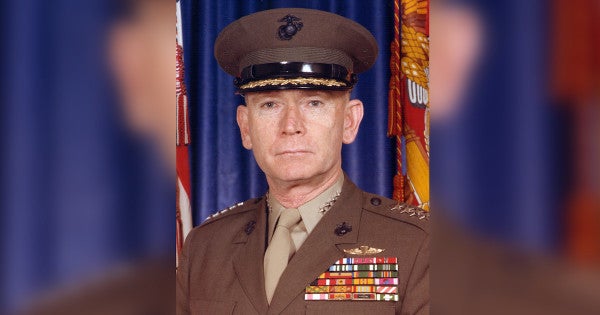 Current Commandant Gen. David Berger noted Kelley's death on Twitter, writing “We should honor Gen Kelley's lifetime of service to the Corps and to the nation. From his service in Vietnam, to leading our Corps through the Beirut bombing aftermath, Gen Kelley served with honor and distinction.”

Kelley served as commandant from 1983 to 1987, according to Military.com. In Vietnam, Kelley earned a Silver Star, the Legion of Merit with Valor device, and two Bronze Stars with Valor device.

During Kelley's time as commandant, 241 service members, including many Marines and sailors from Camp Lejeune, were killed in the Beirut bombing on Oct. 23, 1983.

In November 1983, Kelley gave a plaque with his four stars to a Marine wounded in Beirut, the Associated Press reported.

Kelley visited wounded Marines following the attack, and he stopped by the bed of Lance Cpl. Jeffrey Nashton who suffered from a broken leg, collapsed lungs, a crushed arm and a fractured skull, the Associated Press reported. He couldn't see because his eyes were full of concrete dust.

Nashton reached up and touched Kelley's four stars to confirm he was the commandant, then asked for a piece of paper and wrote “Semper Fi.”

Kelley gave Nashton his stars, saying in a news conference later that he realized “they belonged more to him than me.”

Kelley, alongside others, officiated the dedication of the Beirut Memorial wall on Oct. 23, 1986 at Lejeune Memorial Gardens in Jacksonville, The Daily News reported.