A new RAND Corp. study offers a report card for each of the U.S. military's systems to create generals and admirals that could shape the Pentagon's future approach to building joint-force leaders 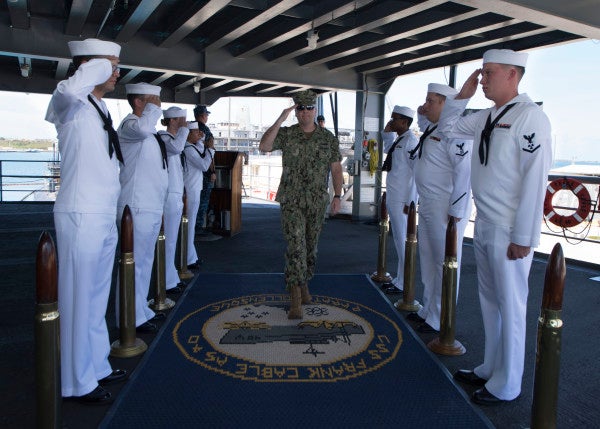 A new RAND Corp. study offers a report card for each of the U.S. military's systems to create generals and admirals that could shape the Pentagon's future approach to building joint-force leaders.

“Raising the Flag: Implications of U.S. Military Approaches to General and Flag Officer Development” was sponsored by the Defense Department and conducted within the federally funded Forces and Resources Policy Center of the RAND National Defense Research Institute.

“To help understand whether military leadership might need to change to better serve national security objectives, the authors of this report analyzed how the military services' approaches to personnel management might influence the ways in which general and flag officers … in each service lead, manage, and advise,” it states. The report highlights similarities and differences in viewpoints among each of the services' O-7-level general officers.

“The value of command is universal. For all the military services, time and successful performance in command (particularly at the O-5 and O-6 grades) consistently serve as the chief signal to promotion boards that an officer is proficient in their specialty and has potential to excel at higher levels,” according to the report.

All of the services stress the importance of fighting as a joint force, but having joint experience is ranked as minimally important by the Army, Navy and Marine Corps and only somewhat important by the Air Force in the O-7 promotion process, according to the report.

The Army, Navy and Air Force agreed that high-visibility assignments and maintaining personal networks are very important to the O-7-promotion process, while the Marine Corps viewed both areas as minimally important to the process, the report found.

Out of all the services, Navy flag officers “demonstrate a higher degree of risk acceptance in operational decisions than other services' [general-officer] counterparts,” when it comes to offering strategic-level advice, it states.

Navy O-7s “offer fresh perspective and strategic advice that does not carry forward biases incurred from previous combat deployment experiences; however, the officer might not have firsthand understanding of how strategic-level decisions affect tactical and operational combat environments,” the report adds.

Army O-7s base advice on formal military planning, “meaning that the officer will be an excellent planner of military operations but might not be highly adaptable and creative, particularly when facing challenges for which doctrine does not exist,” the report found.

Air Force O-7s tend to be “somewhat uncomfortable with challenging the status quo when they provide advice,” and Marine O-7s “value discipline over risk-taking,” it found.

The report also found that the Air Force is likely to be more comfortable with the joint concept when leading large formations or task forces.

RAND found that Air Force O-7s “seek guidance and input from others, rather than executing independently, valuing broader perspectives in decision making processes.”

They also “demonstrate openness to change” and “value jointness more than [general officers and flag officers] in other services,” the report found.

Navy and Marine O-7s “see value” in other communities and career fields, but Navy leaders still tend to “favor service autonomy over jointness” while Marine leaders “still favor Marine Corps perspectives and capabilities over others,” it adds.

Army O-7s tend to be “unfamiliar working in organizations where the Army is not the majority, potentially affecting the Army [general officer's] effectiveness in joint organizations,” according to the report.

A characteristic shared by all the services in the making of general officers is described as “ducks pick ducks,” it adds.

“We heard repeatedly from interviewees in each service that there is a tendency for promotion boards to select officers whose career experiences are comparable to their own, and for senior officers to select aides with backgrounds similar to theirs, positions that serve as a signal of O-7 potential to board members and can provide access to powerful networks of [general officers and flag officers],” the report states.

The notion of ducks picking ducks “serves to cyclically reinforce service culture by perpetuating the selection of officers who similarly reflect service goals and preferences,” it adds.

The Pentagon took steps recently to do away with this “ducks pick ducks” practice when Defense Secretary Mark Esper put out a military-wide directive eliminating the use of photos in promotion boards in an attempt to stop discrimination and bias in the ranks.

The RAND report also found that all personnel systems “discourage risk-taking in career management choices and in professional performance.”

“High-quality evaluations are critical in promotion decisions for officers across the services, and failure resulting from taking risks might not reflect well in an evaluation, even if those risks are innovative and forward-thinking,” the report found.

RAND researchers predicted that the entrenched institutional traditions and cultures of each service mean that changes to the processes that create generals and admirals will likely evolve slowly.

But there are certain trends that could bring change in the general officer corps, such as the “effects of major ongoing military operations since 2001 on more junior officer development.”

There are also current efforts across the services to reform military personnel processes, such as “allowing career intermissions, during which to pursue civilian education, and increasing merit-based promotions,” the report states.

“Now is the time to understand more deeply how the services produce [generals and admirals] and how they select — consciously or not — for professional experiences and other characteristics,” the report states. “By drawing these factors into the light, senior decision makers can best ensure that their reforms succeed in building the [leaders] needed by the services, the joint force, and the nation.”