WASHINGTON — President George W. Bush recalled his father and predecessor as “the brightest of a thousand points of light”... 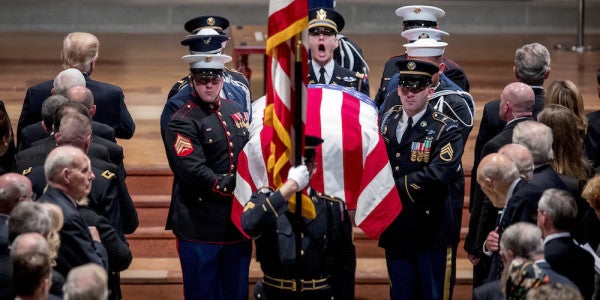 WASHINGTON — President George W. Bush recalled his father and predecessor as “the brightest of a thousand points of light” and “a great and noble man” who managed a peaceful end to the Cold War and helped define the Republican establishment for the last half-century.

“He accepted that failure is a part of living a full life, but taught us never to be defined by failure,” said Bush, in a Washington, D.C., funeral service for the nation’s 41st president, George Herbert Walker Bush.

America’s five living presidents were among the hundreds of dignitaries and elected leaders, spanning decades of public service, crowded into the pews to celebrate the life and legacy of Bush.

Meacham set the tone with a remembrance that was at once poignant and funny, recalling the naval aviator who was shot down over the Pacific in World War II after first making sure he completed his mission — but still wondered why he was spared and how he could live his life to prove worthiness.

He called Bush “America’s last, great soldier statesman, a 20th-century founding father,” in a line of U.S. presidents “who believed in causes larger than themselves.”

But Meacham also recalled Bush’s famous malapropisms and the nasally voice made famous in the impersonation by actor Dana Carvey, who said it was inspired by “Mr. Rogers trying to be John Wayne.”

“An imperfect man, he left us a more perfect union,” said Meacham, whose eulogy inspired laughter and nods of recognition from family members seated in the front row of the National Cathedral.

Services for the patriarch of the Bush family, which dominated the Republican establishment and world affairs for much of the last century, prompted government offices to close and the nation to pause, mourn and celebrate the last president to serve from the so-called Greatest Generation.

President George W. Bush stood with his wife, Laura, and brother Jeb, a former Florida governor and presidential candidate, their eyes welling up and their hands across their hearts in a moment that was at once personal and national in its significance.

Members of the military honor guard carry the flag-draped casket of former President George H.W. Bush at the end of the State Funeral at the National Cathedral, Wednesday, Dec. 5, 2018, in Washington.Associated Press/Andrew Harnik

The world’s most exclusive club — Presidents Donald Trump, Barack Obama, George W. Bush, Bill Clinton and Jimmy Carter — attended, rubbing elbows for the first time since Trump was inaugurated in January 2017 after a bitter campaign in which he criticized nearly every one of them.

All of the living first ladies attended the service at Washington National Cathedral. Rosalynn Carter, who had been expected to miss the event, was able to make it.

Trump attended the funeral but has not been asked to speak. He is the first sitting president not to make the speakers’ program at the funeral of a predecessor since President Richard Nixon failed to eulogize Lyndon B. Johnson in 1973.

Trump sat somewhat awkwardly in the front row among the other presidents, shaking hands with the Obamas when he arrived as the Clintons stared coldly ahead.

When President George W. Bush arrived a few minutes later, he shook hands with each of president and first lady, and appeared to fish for a piece of candy to give to Michelle Obama.

Although Trump often criticized the elder Bush, as well as his sons George W. and Jeb, the family deliberately avoided using the funeral to make a political statement against him. Trump was excluded from Sen. John McCain’s memorial service at the same cathedral in September.

Since Bush’s death Friday at age 94 at his home in Houston, Trump has showered his family with condolences and offered tributes to his public service.

On Tuesday afternoon, Trump and first lady Melania Trump exchanged embraces with the Bush family at the Blair House, the president’s official guest quarters. Trump has granted them use of Air Force One, as the plane is known when the president is aboard, for transporting the casket.

Despite those efforts, comparisons between Trump’s muscular “America first” nationalism and Bush’s call for a “kinder, gentler America” inevitably have dominated some of the news coverage.

The former president was eulogized by his son George, the 43rd president, along with former Canadian Prime Minister Brian Mulroney; Alan Simpson, a former senator from Wyoming; and Meacham, a historian who wrote “Destiny and Power: The American Odyssey of George Herbert Walker Bush.”

Mulroney became close friends with Bush as they negotiated the North American Free Trade Agreement, one of several aspects of Bush’s legacy that Trump has excoriated.

Bush’s casket lay in state under the soaring rotunda at the U.S. Capitol since Monday night. After an official arrival ceremony with members of Congress on Monday, members of the public jostled in long lines on Tuesday, some waiting more than three hours to pay their respects to a patrician leader known for his ethics and decency.

Among the mourners Tuesday was Bob Dole, Bush’s former political rival. Wounded in World War II, the 95-year-old Dole struggled to rise from his wheelchair and offer a salute to Bush, a Navy pilot who was shot down over the Pacific during the war.

In addition to competing in the 1988 Republican presidential primary, Bush and Dole helped to rebuild and define the Republican establishment, especially after Nixon was forced to resign in disgrace in 1974 amid the Watergate scandal.

Bush served as President Ronald Reagan’s vice president for two terms, and then as president from 1989 to 1993. He led America into war to oust Iraqi troops from Kuwait, and helped guide the peaceful dissolution of the Soviet Union and the reunification of Germany after the Berlin Wall tumbled, as the Cold War finally drew to a close.

But Bush’s deft hand in foreign affairs failed at home, where he saw his popularity plummet as the economy soured. He lost after one term to Bill Clinton, a Democrat, but Bush’s popularity grew as the decades passed and his achievements became more clear.

Bush’s remains were taken from the Capitol on Wednesday morning and driven to the National Cathedral, an iconic Neo-Gothic church. As president, the elder Bush attended a ceremony to mark the cathedral’s completion after 83 years of construction, though decorative work continued.

The funeral lasted about two hours and featured readings from three of his grandchildren: Ashley Bush, Lauren Bush and Jenna Bush Hager.

The casket will be flown to Houston for a second funeral on Thursday before Bush is buried in College Station, home of the George Bush Presidential Library and Museum at Texas A&M; University.

The program also featured military bands and singers and included selections from American composers Aaron Copland and John Williams, among others.

Bush, whose close friends and family sometimes called him “41” to mark his order in the presidential procession, helped plan details of the funeral, which like other presidential funerals was carefully choreographed years in advance of his death.

“41 didn’t like the idea at all of this whole week,” said Chris Begala, a member of Bush’s media team. “You’d be surprised how many times he would say, ‘Do you really think people will come?’”

Begala said Bush had joked that he wished to set a record for the shortest presidential funeral ever.

“That is not going to be granted,” he said.