Navy officials say there's no apparent connection between three suicides in one week aboard the USS George H.W. Bush, but others argue there is a connection — their command 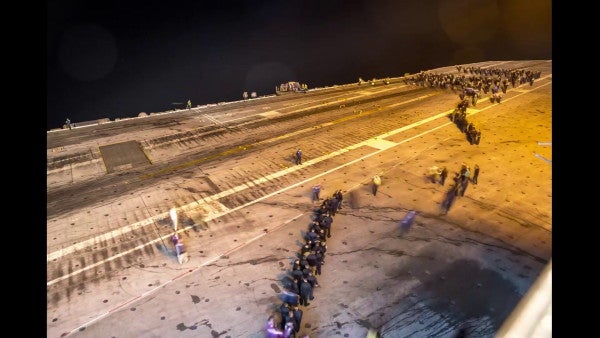 Editor's Note: This article by Gina Harkins and Patricia Kime originally appeared onMilitary.com, a leading source of news for the military and veteran community.

Three sailors assigned to the same ship died in apparent suicides in the last week, leaving some asking what more leaders can do to support troops as the military grapples with rising rates of self-inflicted deaths.

Aviation Ordnanceman 1st Class Vincent Forline, who was also assigned to the Bush, was found dead in an apparent suicide five days prior.

“My heart is broken,” Capt. Sean Bailey, the Bush's commanding officer, said in a Facebook post Monday. “… We need All Hands to engage by bringing forward your suggestions and ideas for how we can work together to prevent another suicide. I want to reiterate that there is never any stigma or repercussion from seeking help.”

Shelton, Stuart and Forline were the third, fourth and fifth Bush crew members to die by suicide in the last two years. Navy officials say there's no apparent connection between the three. The sailors did not serve in the same departments, Cragg said.

But others argue there is a connection: their command.

“They're saying there's no connection like they're looking for some suicide pact that these three sailors had last week or something,” said Shawn Peacock, an administrator on the Facebook group Decelerate Your Life, which posted about the suicides Friday. “The connection absolutely is their command.”

Peacock said he served on the Bush from 2011 to 2016. Since posting the news about the recent suicides, he said he has heard from dozens of active-duty sailors who still serve on the ship. Peacock runs the Facebook page, which has more than 200,000 followers, with another former Bush sailor.

Sailors are under a lot of pressure when a ship's undergoing maintenance, he said. They're often told they'll be able to take leave and spend time with their families once they're back in the shipyard, but it can be stressful.

They're faced with tight deadlines, and senior leaders are constantly walking around to check on their progress, Peacock said. It can make for long days, pulling people away from their families even when stateside.

Sailors also don't always have access to mental-health professionals on the ship, Peacock said. Or if they try to take time off to see someone, some view it as an attempt to get out of work.

“The broad consensus,” he said of sailors currently assigned to the Bush who've reached out to him in the wake of the suicides, “is that everybody's overworked and they can't take leave.”

Navy officials did not immediately respond to questions about members of the crew being overworked. When asked whether officials are investigating possible command climate issues, Cragg said they are “supporting each other and comforting those in need.”

“The leadership of USS George H. W. Bush are engaged with their crew and focused on taking care of their Sailors and their families,” she said.

Chaplains, psychologists, counselors and leaders are providing support and counseling to those grieving, Cragg added. A special psychiatric rapid intervention team is also aboard the ship.

No members of the Bush leadership team have been relieved or reassigned as officials with the local Norfolk and Portsmouth police departments and members of the Naval Criminal Investigative Service look into the apparent suicides, she added.

The Bush crew is not the only military command dealing with high suicide rates. The Air Force recently declared war on hopelessness in the ranks after a sharp spike in suicides. Service leaders found toxic and uncaring leadership was having a major effect on the well-being of airmen.

Last year, 325 active-duty troops from across the services died by suicide — the highest number since the Defense Department began tracking the problem in 2001.

“If someone dies or several people die, no one is held accountable,” Caserta said. His son cited a toxic command in his suicide note.

The string of suicides not only points to a problem within the carrier's chain of command, but with the Navy at large, he said.

“They aren't doing proper training; they aren't telling people how to get help,” Caserta said.

He and his wife Teri have been pressing members of Congress to consider a bill they call “the Brandon Act.” It would allow service members to utter a code word if they are suicidal or a victim of bullying, hazing or other issues, which would give them immediate access to mental health services. It would bar their command from asking any questions in the moment or retaliating against the service member later.

It's a chance to temporarily “tap out” without hurting one's career, Caserta said.

Defense Department officials plan to release a new, comprehensive report on military suicides in 2018 on Thursday.