Two Georgia men targeted earlier this year by online activists for their associations with radical white extremism have been kicked out of the Army National Guard, following months of investigation 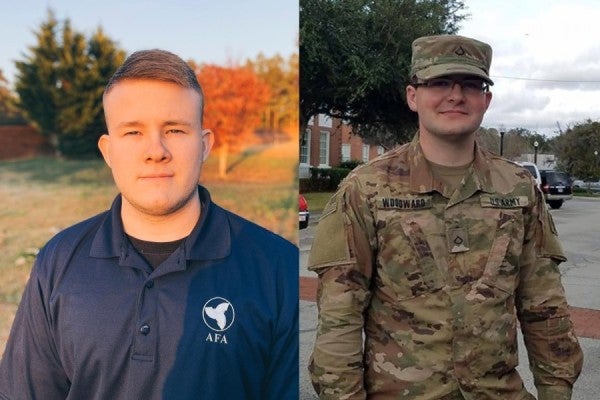 Two Georgia men targeted earlier this year by online activists for their associations with radical white extremism have been kicked out of the Army National Guard, following months of investigation.

Army investigators started looking into Dalton Woodward and Trent East, both members of a neo-pagan sect called the Asatru Folk Assembly, earlier this year after the activist group Atlanta Antifascists published a report linking the two men to the controversial sect of paganism identified by the Southern Poverty Law Center as a hate group.

National Guard officials have not released details about their investigations. Woodward's unit returned from its deployment in June and an investigation into his connections with white supremacy concluded in October.

A spokeswoman for the Georgia National Guard said he was “no longer a member” of the guard but declined to comment on the terms of his separation or give details about the investigation. The Atlanta Journal-Constitution had filed a Freedom of Information Act request seeking more details, but that request is pending with the U.S. Defense Department. The AJC requested comment from Woodward through his longtime friend East, but received no response.

The military has struggled in recent years rooting out personnel with membership in white supremacist organizations or who have expressed sympathy for white power causes. In 2017, the Military Times polled active-duty troops and found nearly one in four had seen signs of white nationalism among their fellow service members. Among non-white troops, the percentage was much higher with 42% saying they had personally experienced examples of white nationalism on the job.

Just this month the Air Force moved to discharge a sergeant stationed at Schriever Air Force Base in Colorado after he was identified as a local organizer for the American Identity Movement, a white nationalist organization formerly called Identity Evropa.

The investigation into East took longer and is still regarded as an open investigation, even though East told the AJC he received official notice of his separation Dec. 14.

A spokesman for the Alabama Guard said East has 45 days to contest the findings and the investigation remains officially open until then. That spokesman also declined to give specifics about the terms of East's separation, but East told the AJC the Army was recommending he be given a general discharge, a step down from a traditional honorable discharge that indicates unacceptable conduct not in accord with military standards.

Soldiers with general discharges are not eligible for some veteran benefits, like the GI Bill.

Following the Atlanta Antifascists report, East lost his job as a jailer for the Haralson County Sheriff's Office.

East contends he is not a racist, and that he is just interested in his ancestry and worshiping in the same way they did centuries ago.

“The whole race thing started with me finding Asatru or Odinism or whatever you want to call it and seeing that as a better option than Christianity as a spirituality,” he said. “I've just never been a fan of Christianity, and so seeing a faith that was about my ethnic roots was something I could get into a little more.”

The Asatru Folk Assembly adheres to a “neo-Folkish” brand of Norse paganism that traces its roots to pre-Christian Europe, but its whites-only emphasis on racial identity has attracted neo-Nazis and other white supremacists.

East and Woodward both attended a 2017 speech by white nationalist celebrity Richard Spencer at Auburn University. Photos from the event show the men carrying signs with a variant of a the “white genocide” theory prevalent among white supremacists.

“The existence of our people is not negotiable,” East's sign reads. Woodward's sign read, “We have a right to exist.” Both echo the so-called “14 words” motto popular among white supremacists who espouse the theory that non-white groups are displacing whites.

Following the Spencer speech, East posted on his group's Facebook page, “It was a great talk, lots of great stuff was said. I highly recommend finding a video of it.”

In an interview with the AJC, East downplayed his attendance at the speech.

Along with his jailer job, East said the resulting attention has cost him other jobs, as well as friends and family members who disagree with his beliefs.

“I just went there because at the time I heard he was talking about the recent removal of Confederate monuments. That's something I wanted to hear,” he said. “And it turned into a something a little worse obviously.”

He also minimized his contact on social media with neo-Nazis and white supremacists, some of whom claim membership in the Asatru Folk Assembly. He said he stays away from those that are “Hitler worshipy.”

“I don't necessarily agree with it, because there is a lot of racial issues there,” he said.

A spokesperson for Atlanta Antifascists said East was merely “dissembling his beliefs” in an attempt to make his statements and actions appear less extreme.

“He's a confirmed white supremacist just shopping around in the marketplace, picking and choosing by aesthetics,” she said. “I'm surprised he is not backtracking more.”

East and Woodward are not the only members of the group to lose their government jobs because of their associations. In April, the Virginia Capitol Police fired one its officers after another activist group revealed his membership with the pagan group.

Paganism, itself, isn't disqualifying for members of the military and many pagan groups explicitly denounce white supremacy and Asatru paganism specifically. Yet the Asatru Folk Assembly, which is based in Tennessee, has a Facebook page specifically for its adherents in the military.