Until recently, only two of the USS Gerald R. Ford's 11 weapons elevators were certified. Another two came online this week. 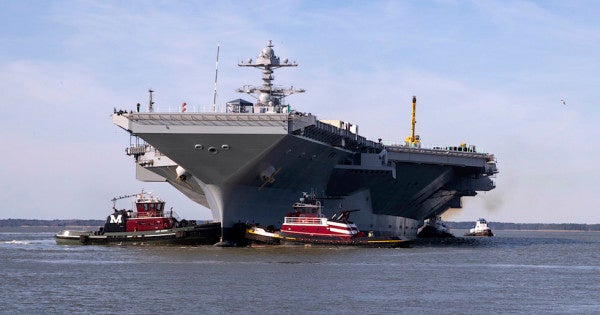 After 15 months at Newport News Shipbuilding, the USS Gerald R. Ford headed to sea Friday with some of its technical problems solved.

The $13 billion warship moved into the James River before heading out to the Atlantic Ocean for sea trials, the Navy said. While off the Virginia coast, the crew and shipyard employees will conduct a series of tests.

It capped a week of headlines for the Navy's newest carrier.

At a House Armed Services hearing Tuesday, Rep. Elaine Luria repeatedly pressed Navy brass about the Ford's troublesome weapons elevators that lift ordnance from the lower levels to the flight deck. Until recently, only two of the 11 were certified. Another two came online this week.

The elevators are powered by an electro-mechanical system much different than elevators on older Nimitz-class ships, which employ a combination of hydraulics, wire rope and electric motors. Until all are certified, the Ford won't be in fighting shape.

The next day, Navy Secretary Richard Spencer took exception to the questions and said the Navy was not solely to blame for the Ford's problems. Congress has done the military no favors by not passing budgets on time, he said.

“It's an atrocity, I think, that they go home on a vacation — or a recess, excuse me — and don't do the business that has to be done at hand. We're still working here,” he said.

He said Luria's questions were “disparaging” and not helpful.

Luria fired back, saying “I find it disappointing that the Secretary finds Congressional oversight disparaging.”

Sen. Tim Kaine was asked about the dust-up Friday after visiting Fort Eustis in Newport News. He expressed confidence that the Navy and the shipyard are working through the problem. But Congress must still aggressively monitor progress and ask tough questions.

“Our job — congresswoman Luria's job — is to push,” Kaine said. “Our job is not to say, OK, whatever you tell us is fine.”

He brought up what others have said when it comes to Ford: that it was designed with too many high-tech, untested systems instead of phasing in those systems over several ships.

“With the Ford, virtually everything was redesigned,” he said.

Before leaving the yard, the crew conducted a multi-day “fast cruise” where they simulated various scenarios that could be encountered at sea.

“After a challenging post-shakedown availability at Newport News Shipbuilding, the crew is excited to turn their hardhats in and get Warship 78 to sea,” said Capt. J.J. Cummings.