"We must ensure that the team takes the opportunity to recharge and allow for fresh eyes on upcoming challenges as required." 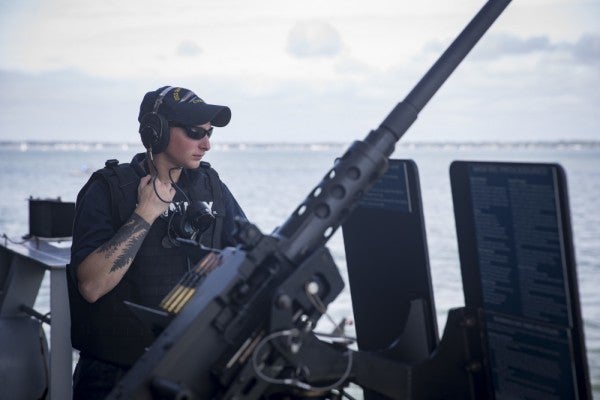 As the technology-overloaded supercarrier Gerald R. Ford continues its quest to get a full set of working weapons elevators, the Navy officer managing the program has been removed from his post and reassigned, according to officials with Naval Sea Systems Command.

Assistant Secretary of the Navy James “Hondo” Guerts pulled Capt. Ron Rutan from his role as Ford (CVN 78) program manager July 1 and reassigned him to the NAVSEA staff, Rory O'Connor, a NAVSEA spokesman, told Military.com in a statement.

The staffing change was based on the recommendation of Rear Adm. James Downey, program executive officer for Aircraft Carriers, and “due to performance over time,” according to the statement.

“We must ensure that the team takes the opportunity to recharge and allow for fresh eyes on upcoming challenges as required,” O'Connor said in the statement. “While there is no perfect time for leadership transitions, it is prudent to bring in renewed energy now to lead the CVN 78 team through the challenges ahead.”

He noted that the carrier is 10 months into post-delivery test and trials, also known as PDT&T, with full-ship shock trials, a rigorous assessment of how the ship handles underwater explosions, set to take place next fiscal year.

While O'Connor described the Ford's current PDT&T phase as “impressively ahead of plan,” much attention has focused on Navy efforts to get all the ship's 11 weapons elevators working, a task still only half-complete.

In 2019, then-Navy Secretary Richard V. Spencer famously told President Donald Trump, “You can fire me,” if the elevators were not all working by that summer.

He later attributed the missed deadline to issues with the shipbuilder, Huntington Ingalls Industries. While Spencer was ultimately asked for his resignation in November 2019 over an unrelated issue, Trump alluded to the Ford in tweets about the ouster.

Rutan, who briefed reporters on the status of Ford developments at the Surface Navy Association National Symposium near Washington, D.C., in January, has managed the Ford-class carrier program since 2013. The Ford, which has been in service since 2017, is the first in a class of three carriers that incorporate new technology, including advanced arresting gear and an electromagnetic launch system known as EMALS.

The new technology led to substantial delays and cost overruns in earlier phases of the Ford's development.

The ship's weapons elevators, none of which was working properly when it entered service, continue to be a sticking point. Geurts recently told reporters that the Navy now hopes six of the 11 will be working by this summer.

When the Ford completed post-shakedown availability last October, Rutan noted that the carrier's growing pains would benefit the ships that followed.

“The design and execution challenge in delivering a first-of-class warfighting platform is not only to make CVN 78 better, but also to enhance production on the next ships in the class — the future USS John F. Kennedy and future USS Enterprise,” he said, according to a Seapower Magazine report.

“Even in the face of a global pandemic, the team has kept a lightning pace, and we will continue to do so, for our Navy and our Nation, until USS GERALD R. FORD completes her post-delivery obligations and is fully available and ready for tasking by the Fleet,” O'Connor said. “… CAPT Metcalf's proven program management acumen and extensive waterfront experience will be a tremendous asset to the CVN 78 team in the months ahead.”