Navy Secretary Richard V. Spencer said earlier this month that he had bet his job on getting all the USS Gerald R. Ford's elevators to work, telling President Donald Trump that the project would be done by this summer "or you can fire me." 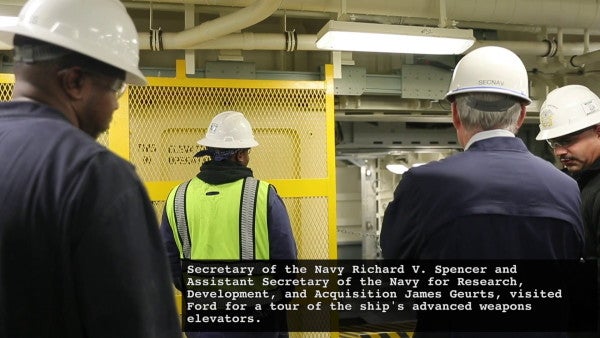 The bigger and faster electromagnetic weapons elevator on the new
aircraft carrier Gerald R. Ford is finally ready for use, an achievement the Navy called a “major milestone” for the program and other Ford-class carriers to be built in the future.

Navy Secretary Richard V. Spencer said earlier this month that he had bet his job on getting all the Ford's elevators to work, telling President Donald Trump that the project would be done by this summer “or you can fire me.”

In a release last week, the Navy said the Advanced Weapons Elevator (AWE) was turned over to the ship Dec. 21 by engineers from Huntington Ingalls Industries-Newport News Shipbuilding, in Newport News, Virginia, where the Ford is going through its post-shakedown availability (PSA) to become the 11th carrier in the fleet.

The AWE uses electromagnetic, linear synchronous motors to accommodate heavier loads and swifter movement than the cable elevators on
Nimitz-classcarriers, according to the service.

The results will be seen in smoother operations and more flights from the carrier's deck, said Lt. Cmdr. Chabonnie Alexander, the Ford's ordnance handling officer.

“This will allow us to load more aircraft faster and, in the long run, increase our overall sortie generation rates,” he said in the Navy release.

“To be able to finally push the buttons and watch it operate like it's designed to do was a great feeling,” Alexander said. “Once these systems are proven, they are going to pay huge dividends for naval strike capability.”

Getting all of the elevators working was one of his main concerns, Spencer said earlier this month at an event sponsored by the Center for a New American Security.

“I haven't been fired yet by anyone,” he said, and “being fired by the president really isn't on the top of my list.”

The $13 billion Ford was delivered to the Navy in June 2017, two years late and over budget. It was commissioned a month later without any working weapons elevators.

In the long process from design to delivery, the Ford has also experienced technical problems in its new Electromagnetic Aircraft Launch System (EMALS) and the Advanced Arresting Gear.

SEE ALSO: Trump Was Right: The Navy's New Aircraft Catapult Is No Match For 'Goddamned Steam'