The German navy is building a laser cannon

A German K-130 class corvette next year will receive a prototype high-energy laser weapons system, or HELWS, for a two-year demonstration 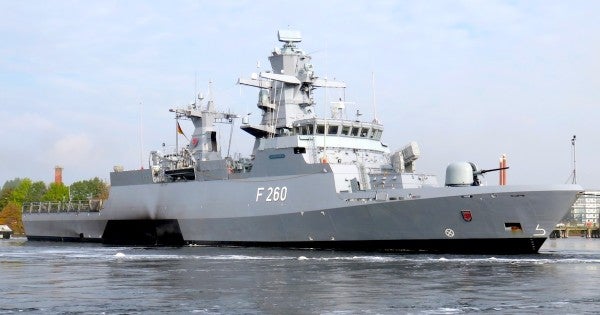 Germany is planning to install a laser cannon on its warships.

A K-130 class corvette next year will receive a prototype high-energy laser weapons system, or HELWS, for a two-year demonstration, according to German media and European defense contractor MBDA, whose Rheinmetall subsidiary will build the device.

“The HELWS demonstrator for this opportunity will be optimized for the counter-unmanned aerial system (CUAS) threat spectrum, including drones, mini-drones and micro-drones,” MBDA spokesman Günter Abel told the National Interest.

Germany's Federal Office of Bundeswehr Equipment, Information Technology and In-Service Support, or BBAAINBw, is expected to release a statement of work and a request for proposal later this year.

“The German Navy requirement provides for the integration of a HELWS on a Germany Navy K130 Braunschweig-class corvette in the 2020-2021 timeframe, and includes a series of engagements trials against an as yet unspecified target set,” said Abel. “This will be a 10-kilowatt to 20-kilowatt laser effector, so not yet optimized to engage missile threats; however, the target catalogue will ultimately be defined by the German customer.”

In 2016, Rheinmetall tested a Rheinmetall installed a 10-kilowatt laser fitted into a turret of a German warship, but it was only used to track targets.

“In principle all the functionalities and technologies of the MBDA Germany HELWS demonstrator are now proven, and the next step towards a laser product is really driven by the German customer. The priority for us now is to get ready so that we can offer a real integrated and more robust demonstrator to the German Navy.”

The Bundeswehr wants to first develop lasers for warships, and then land-based lasers for missions such as missile and drone defense of bases, according to German newspaper Die Welt.

“Laser weapons can also be expected in Bundeswehr vehicles for years, according to the experts, but with a performance lower than the laser of the ship. MBDA also sees an opportunity to use laser weapons in containers to protect ships in ports.”

Interestingly, Die Welt noted that “a German laser weapon would have the advantage that it does not require US technology. And, therefore, the export would not depend on the consent of the United States.”

Germany isn't the only European nation working on laser cannon. France opened a laboratory this year to develop laser weapons, while Britain is developing its Dragonfire laser (MBDA is also involved in both the French and British projects). Meanwhile, the U.S., Russia, China and Israel are among the other nations busily devising combat lasers.

The U.S. Army plans to field Stryker armored vehicles armed with 50-kilowatt lasers by 2023, while in 2017, the U.S. Navy deployed the amphibious transport USS Ponce – armed with a laser cannon – to the Persian Gulf.

While there seems to be a great deal of optimism that laser weapons have become viable, there are still some question marks. Combat lasers have the advantage of a weapon whose destructive effects travel at the speed of light, as well as having an ammunition supply that isn't limited by how many shells can be stored in a ship's magazines.

However, lasers do devour electricity on ships whose electrical generation capacities often seem taxed by a profusion of energy-hungry systems. A laser must also “dwell” on a target for a sufficiently long period – perhaps a few seconds – to inflict damage.

SEE ALSO: The U.S. Navy Wants To Mount A Powerful New Laser On A Destroyer To 'Burn The Boats'

WATCH NEXT: The U.S. Navy Demonstrates A Laser Weapon On The USS Ponce