"LCS packs a punch and gives potential adversaries another reason to stay awake at night." 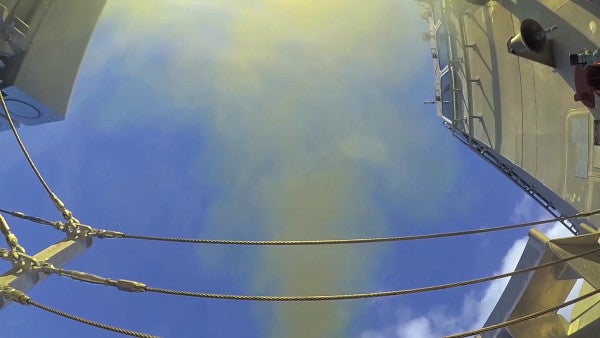 The littoral combat ship USS Gabrielle Giffords launched a Naval Strike Missile on Tuesday, marking the first time the NSM has been fired in the Indo-Pacific region, the Navy told Insider.

The NSM, along with additional firepower from U.S. and Singaporean forces, sank the decommissioned frigate USS Ford as part of an exercise with Singapore's navy in the Philippine Sea on Tuesday.

The Gabrielle Giffords, along with U.S. Navy helicopters, ships, and submarines, and Singaporean navy ships, conducted the exercise as part of Pacific Griffin, a biennial exercise in the Pacific near Guam.

“LCS packs a punch and gives potential adversaries another reason to stay awake at night,” Rear Adm. Joey Tynch said in a statement. “We are stronger when we sail together with our friends and partners, and LCS is an important addition to the lineup.”

The NSM, made by Raytheon, is a stealthy long-range missile capable of hitting targets up to 100 nautical miles away. It flies at low altitudes and can rise and fall to follow the terrain, and it can evade missile-defense systems.

Read on to learn more about the Pacific Griffin exercise and the sinking of the USS Ford.

This is the first time an NSM has been deployed to the 7th Fleet area of responsibility, and the Gabrielle Giffords is the first littoral combat ship to deploy with an NSM on board.

Eventually, the entire littoral-combat-ship (LCS) fleet will have NSMs aboard, CNN reported. The LCS fleet and NSMs will allow the U.S. Navy to engage with China in the South China Sea.

With the NSM, “You can hit most areas in the South China Sea if you're in the middle” of the sea, Bryan Clark, a senior fellow at the Center for Strategic and Budgetary Assessments, told Insider.

Compared with China's DF-21 “carrier-killer” missile, the NSM has a shorter range but better precision targeting, enabling it to destroy an enemy vessel rather than just damage it, as the DF-21 is built to do, Clark said.

The Hellfire missile is a precision-strike weapon and can be fired from airborne systems, like the MH-60S Seahawks used in Tuesday's SINKEX, or from vessels like an LCS.

The Gabrielle Giffords is the first LCS to perform an integrated NSM mission in the Indo-Pacific region.

Many littoral combat ships have Harpoon missiles aboard, which don't have the long range of the NSM.

Littoral combat ships are designed for use in the open ocean and closer to shore, in littoral waters. They typically perform mine countermeasures, anti-submarine warfare, and surface warfare, but they are capable of performing a variety of missions, according to the Navy.

Decommissioned vessels that are used in these kinds of exercises, like the Ford, are referred to as “hulks.”

They must be sunk in at least 6,000 feet of water and at least 50 nautical miles from land.

Before they're sunk, they're cleared of transformers and capacitors, as well as of trash, petroleum, and harmful chemicals like polychlorinated biphenyls and mercury, and materials containing fluorocarbons, according to a Navy release.