This Girl Scout Made It Her Mission To Honor Fallen Servicewomen

When 18-year-old Michayla Cassano learned that her home state of Colorado only had two memorials honoring fallen servicewomen, she took … Continued 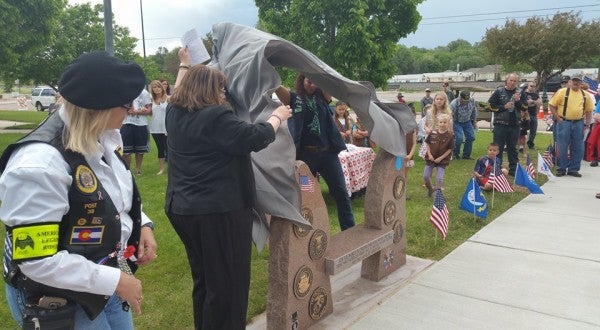 When 18-year-old Michayla Cassano learned that her home state of Colorado only had two memorials honoring fallen servicewomen, she took matters into her own hands. The Fountain, Colorado Girl Scout spent three years planning, designing, and soliciting donations for a memorial honoring women who lost their lives in combat, urging, “We need more recognition for women.”

Cassano took on the project as part of her Girl Scout Gold Award, all the while battling two different kinds of blood disorders. Her hard work and determination paid off — Colorado’s third memorial dedicated specifically to fallen servicewomen was revealed near Fort Carson on Memorial Day.

Cassano raised nearly $6,000 to erect the memorial, a rosy-hued granite bench with an inscription that reads, “For the women in uniform who have served and for those who sacrificed their lives in defense of our country — may they never be forgotten.” Cassano spoke with veterans organizations and other companies in her area in order to raise all of the required funds.

Related: This Marine Is About To Run 161 Miles In Honor Of Fallen Servicewomen »

The memorial turned out even better than she imagined, Cassano claims, but it was the journey that was the most rewarding part of her project. “I’ve met people who were in World War II and I got to listen to their stories,” she told KRDO News.

“Not every GI is a Joe. Sometimes she’s a Jane,” Barr added.

Watch the report from KRDO below.