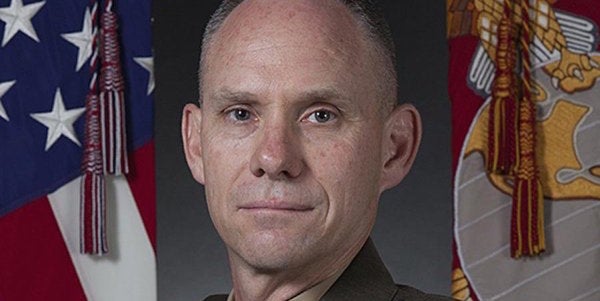 The USS Cole case judge Wednesday found the Marine general in charge of war court defense teams guilty of contempt for refusing to follow his orders and sentenced him to 21 days confinement and to pay a $1,000 fine.

Air Force Col. Vance Spath also declared “null and void” a decision by Marine Brig. Gen. John Baker, 50, to release three civilian defense attorneys from the case, and ordered them to appear before him in person here at Guantanamo or by video feed next week.

At issue was Baker’s authority to excuse civilian, Pentagon-paid attorneys Rick Kammen, Rosa Eliades and Mary Spears from the case of because of a secret ethics conflict involving attorney-client privilege. Also, the general refused a day earlier to either testify in front of Spath or return the three lawyers to the case.

In court Wednesday, Baker attempted to protest that the war court meant to try alleged terrorists who are not U.S. citizens had no jurisdiction over him. Spath refused to let him speak and ordered him to sit down.

Spath said Baker, the chief defense counsel for military commissions, was out of line in invoking a privilege in refusing to testify about both the decision to release and the absence of the three attorneys at the court. Spath ordered the three to come to Guantanamo this week; and they refused.

Privilege, the Air Force judge declared, is a judge’s domain and that a judge has the authority to weigh and review privilege.

Without that, he said, there would be “havoc in any system of justice.”

The judge said in court that a senior official at the Pentagon, Convening Authority Harvey Rishikof, would review his contempt finding and sentence. Meantime, however, he ordered court bailiffs to arrange for the general to be confined to his quarters — a room in a trailer at Camp Justice, behind the courtroom — until Rishikof acted or found a different place. Rishikof had approved the site provisionally, Spath said, and was permitting Baker to have internet and phone communications at his quarters.