When President Donald Trump set his hands on a glowing orb during his first foreign trip to Saudi Arabia, social... 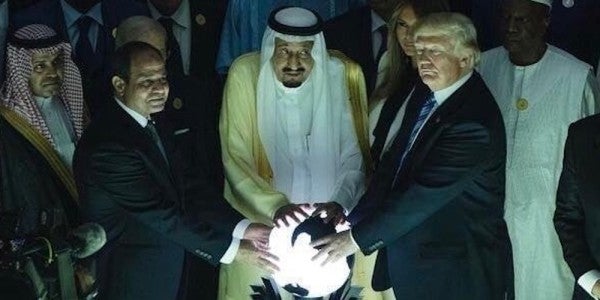 When President Donald Trump set his hands on a glowing orb during his first foreign trip to Saudi Arabia, social media lit up with science fiction jokes.

And there were Photoshops galore:

For clarification, this is not a Satanic ritual. pic.twitter.com/CccP39fqN4

In reality, Trump had touched the globe as part of an inauguration ceremony for the Global Center for Combatting Extremist Ideology in Ridyah, Saudi Arabia on Sunday. Together, the three leaders placed their hands on the globe to start a film about the center.

The newly-opened center has a large TV wall displaying ongoing extremist activity and aims to come together to stop the spread of violent extremism, the Saudi Gazette reports. It will be used to monitor potential threats of terrorism and, through the help of experts, reveal and confront extremist speech.

Saudi Arabia's Foreign Minister Adel Al-Jubeir said his country wants the U.S. to know that they are “not an enemy” and are committed in the fights against extremist groups like Daesh, also known as the Islamic State.

“We are the second army after the U.S. military in the international coalition against terrorism,” Al-Jubeir said. “The efforts will be an effective partnership between the Islamic world and the West in general to combat terrorism.”

“This groundbreaking new center represents a clear declaration that Muslim-majority countries must take the lead in combatting radicalization, and I want to express our gratitude to King Salman for this strong demonstration of leadership,” Trump said. “We must be united in pursuing the one goal that transcends every other consideration. That goal is to meet history’s great test — to conquer extremism and vanquish the forces of terrorism.”

But the seriousness of the center didn't stop people on the internet from joking at the sight of Trump touching the glowing orb.