"I'm basically trying to inspire others to have that same feeling of hope and love." 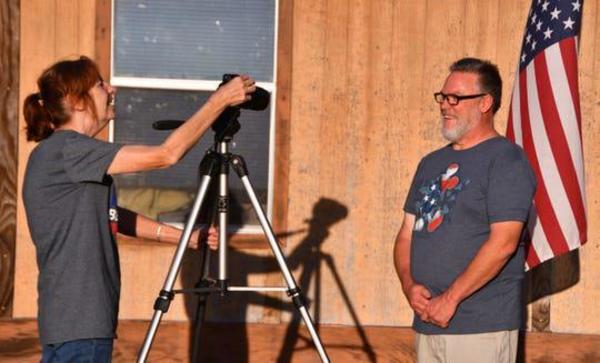 Every day, David Brubaker helps feed the hungry and assist others in need in central Brevard County.

Every night, he takes a minute to feed his soul, standing in front of his house at 7 p.m. to sing “God Bless America” and offer a musical message of hope in the midst of a global pandemic.

Brubaker's voice has rung out nightly in a remote area of Merritt Island since Gov. Ron DeSantis issued a statewide “safer at home” order April 1. He plans to sing it until the order is completely lifted — or a little beyond: “You never know. I'm inspired to sing,” he said.

“I was really feeling it that night he issued the order, like, 'Wow. This is so heavy on our nation, and affecting everybody,” the 55-year-old said.

“So I went outside on my front porch around 7 and started singing. My wife came out, and a neighbor came out, and they applauded … I'm basically trying to inspire others to have that same feeling of hope and love. We're all sitting here at home, and I want to offer calm and community, and love for our country.”

'It brings tears to my eyes'

He's a veteran of reaching out as well as an Air Force vet. Brubaker is the president of Central Brevard Sharing Center, a nonprofit that offers emergency assistance for those struggling to meet basic needs. He's used to seeing the effects of crisis and poverty at a place where they're feeding up to 160 people take-away lunches on weekdays — up from the normal 130 — and providing groceries and other aid for families in need.

So on April 28, the sun winding down its run and casting shadows on the wall of his home, the baritone took yet another turn at the beloved tune. Dawn Brubaker, his wife of 31 years, recorded his latest rendition as usual, clips which they've shared on social media.

He sings the song in approximately one minute. His voice soared this night on the closing phrase and word, “my home sweet home.”

“Yeah, brother, amen!” an applauding neighbor shouted from her porch as a smile split Brubaker's face and the American flag behind him waved slightly.

“I think it's wonderful,” his wife said. “It brings tears to my eyes that he's so dedicated, not only in his job, but everywhere.”

Brubaker, who plays guitar “to wind down” at home, sings at his church, Cocoa Presbyterian, too. And every Tuesday, he sings “America the Beautiful” at his Rotary Club meeting.

He chose “God Bless America” for his nightly COVID-19 era offering because of its positivity, he said. It moves him that Irving Berlin, a Russian Jew, wrote the song before World War I, and that more than 100 years later, Americans still find it just as powerful.

And Brubaker recalls the poignant effect the song singer Kate Smith made popular in the 1930s had on him after 9/11, when he heard it during the seventh inning stretch of a New York Yankees game.

“I'm a man of faith, and so asking God to bless America is not a stretch for me,” he said. “The words are so strong … seeing a neighbor stop in her tracks to listen really made me want to inspire others. I've been blessed with a little bit of a voice, and I'm humbled by that.”