As the clock ticked closer to a government shutdown Friday, lawmakers said they were nearing a deal on a massive … Continued 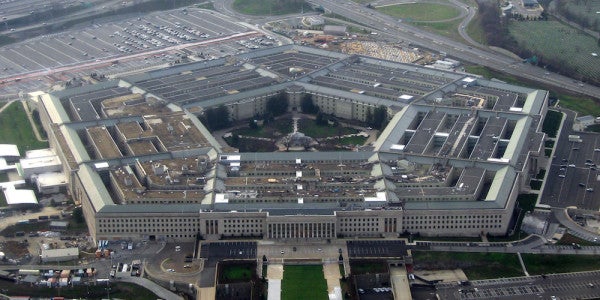 As the clock ticked closer to a government shutdown Friday, lawmakers said they were nearing a deal on a massive $1.4 trillion, two-year defense budget plan.

The effort would lift defense budget caps that have for years bedeviled the Pentagon, usher in a new stability for military spending and trigger a wave of modernization.

But the looming shutdown didn’t stop a bipartisan group of Senate leaders praise their two-year deal to bust budget caps.

“Not only will it end the series of…fiscal crisis that have gridlocked this body, it will also deliver a large investment in our military,” Senate Minority Leader Sen. Chuck Schumer, D-N.Y, said on the Senate floor. “Our military has suffered from the uncertainty of endless short-term spending bills. This budget deal puts that to an end. It gives the military a significant boost in support and allows the Pentagon to make long-term decisions about its budget.”

The Senate plan would let a two-year budget surpass statutory spending caps in 2018 and 2019 for defense and non-defense spending. It would also extend the debt limit to March 2019, another pressing concern for lawmakers who face a deadline on the issue in the coming weeks.

“This is the upper limit of what anyone thought was possible,” said Todd Harrison, senior fellow and director of defense budget analysis for Center for Strategic and International Studies, a Washington think tank. “This is a big victory for defense hawks.”

Molly Reynolds, a governance studies fellow at the liberal-leaning Brookings Institution, another Washington think tank, said she was also surprised at the size of the plan.

“I’m a little surprised at how big the bill got,” she said. “There’s lots in it beyond just the caps.”

Congressional defense hawks and Pentagon leaders have said the funds will jump-start the demands of the new National Defense Strategy, which shows the U.S. military must prepare for the growing great power threats of Russia and China.

“I’m heartened that Congress recognizes the sobering effect of budgetary uncertainty on America’s military and on the men and women who provide for our nation’s defense,” Defense Secretary Jim Mattis said Wednesday during a White House visit. This week’s “congressional action will ensure our military can defend our way of life, preserve the promise of prosperity and pass on the freedoms you and I enjoy to the next generation.”

In December, the president signed the $700 billion National Defense Authorization Act into law for the 2018 fiscal year.

But much of that funding has been held up in congressional budget fights, forcing the military to operate off a series of temporary stopgap bills, known as continuing resolutions, until lawmakers reach a deal.

“You can count on us. We’ll earn your trust on this,” Mattis said of the potential new windfall. “We will spend the money wisely.”

The two-year proposal is similar to defense spending deals reached in 2015 and 2013, but “much larger in magnitude,” Harrison said.

For this year, much of the funding would go directly to the Department of Defense’s operation and maintenance operations, which makes up about two-thirds of the DOD budget, Harrison said.

“We will be almost halfway through the fiscal year,” he estimated of when the funding could kick in. “Some of the money in there has to be obligated by the end of the fiscal year. There is going to be a rush within DOD to execute this money as quickly as they can.”

“Our military has been operating under debilitating continuing resolutions for more than 1,000 days during the last decade,” Mattis said. “I cannot overstate the negative impact to our troops and families’ moral from all this budget uncertainty.”

The budget deal faces an uphill battle. Even within the Senate, where the plan is expected to pass, some members were expressing skepticism about spending amounts.

“This agreement increases the discretionary spending caps by nearly $300 billion over the next two years, perpetuates the abuse of OCO, and tees up another spending battle two years from now,” said Sen. Bob Corker, R-Tenn., chairman of the Senate Foreign Relations Committee. “To say I am discouraged by the outcome of these negotiations would be an understatement.”

In the House, members of the fiscally conservative Freedom Caucus and Democrats fighting for a fix to the Deferred Action for Childhood Arrivals, or DACA, program, which faces a March 5 deadline, have threatened to vote against the budget deal.

“Given this established template, it will likely pass the Senate fairly easily, since everyone gets something they want out of it,” said Lauren Fish, a defense strategies research associate for the Center for a New American Security, a Washington think tank. “The House will pose more problems, with the Freedom Caucus and progressive Democrats both rankled by key parts of the deal — a massive federal spending increase and lack of DACA assurances, respectively. Ultimately, however, I expect this deal will pass and become law with the president’s signature.”

Even with the deal to surpass budget caps, however, lawmakers will still need to pass an actual plan to appropriate the funding. To make that happen, another continuing resolution, or CR, could be in the works to keep the government’s lights on into March. At that time, lawmakers will need to reach a broader spending deal.

“This deal only sets those higher spending levels, it doesn’t actually appropriate funds to match them,” Reynolds said. “So the deal would set up another CR that would run for a few weeks until appropriators can actually write the bill pushing the funds out the door for specific purposes.”

A March spending deal will trigger a spending spree for the Pentagon’s 2018 fiscal plans, which will need to be completed before the fiscal year ends in October.

At the extreme end of ongoing budget negotiations, a failure to reach a deal would send the government towards its second government shutdown of the year.

A three-day shutdown in January caused minimal disruption, yet could persuade lawmakers to avoid another one.

“I still think it remains unlikely, but there’s a chance it could happen,” Reynolds said. “The test will be in the House.”

While many experts agree a shutdown still seems less likely, it’s still not clear if a continuing resolution will be days or weeks long.

“There is still a chance for a shutdown, given Congress needs to fund the government by midnight even if a budget deal is close to completion,” Fish said. “The question will be if the rumored end of March CR will be passed or a shorter term, maybe days-long CR will pass just to iron out the deal details and get to appropriations.”

A 16-day shutdown in October 2013 caused a rash of military programs to come to a sudden halt, including pay stoppage for military and civilian personnel and the disruption of base services such as commissaries. In addition, death gratuity payments for 30 Gold Star families were also disrupted.

By last week, leaders for a long list of government entities, including the Pentagon, were putting together emergency contingency plans if Congress fails to reach a deal.

“Shutting down the government would be very damaging,” Mattis said Wednesday. “It just paralyzes everything that we do …other than the ongoing active operations at sea and there the troops will continue to fight, the ships will stay at sea. But the bottom line is, training is delayed, the impact just ripples through the force.”