The ‘Secret’ Dogfights Above The Aegean Sea We Rarely Hear About

For decades, a secret air war has been waged over the skies of southeastern Europe between two NATO allies: Greece... 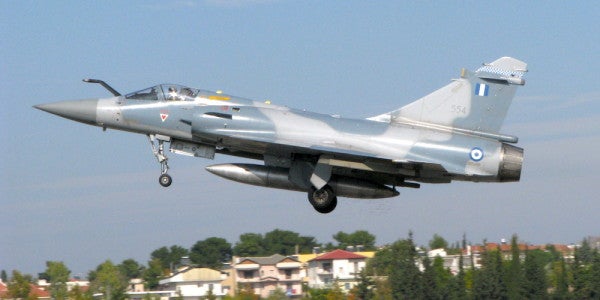 For decades, a secret air war has been waged over the skies of southeastern Europe between two NATO allies: Greece and Turkey.

Greek officials announced on Thursday that a Hellenic Air Force Mirage 2000-5 fighter jet crashed in the Aegean Sea, near the island of Skyros. The pilot, identified by the HAF as 33-year-old Capt. Giorgos Baltadoros, was returning from an aerial policing mission where he intercepted two Turkish Air Force F-16s.

“The mission had finished and it had been on its way back with another Greek plane,” a Greek official told the New York Times. Greek Defense Minister Panos Kammenos said that Baltadoros was a “hero who fell defending national sovereignty and territorial integrity.”

It is not known exactly what caused the Greek fighter jet to crash, but AFP reported that “the pilot may have blacked out during a combat exercise on the return home.” Turkish state-run news agency Anadolu quoted Turkish officials saying that there were no Turkish forces in the area.

While deaths from aerial interceptions over the Aegean are uncommon, violations of Greek airspace by Turkish aircraft happen with some frequency. Earlier this month, Greek troops fired tracer rounds at a Turkish helicopter that flew over the island of Ro with its navigation lights switched off.

The Greek military recorded 1,671 violations of its airspace by Turkish jets in 2016. To put that in perspective, NATO jets were scrambled 780 times to intercept Russian aircraft, the highest level since the Cold War.

A year later, the number of Turkish violations increased to 3,317, and 920 violations have already been recorded for 2018. The jets sometimes get into “dogfights” with one another — flying wildly in the sky while trying to get a missile lock before breaking off.

“Over the space of the past seventeen years, Turkish fighter jets – many of them equipped with combat arms – have been violating Greek airspace, resulting in interception attempts by Greek forces and, in many cases, dangerous air engagements and dogfights, even over inhabited islands of the Eastern Aegean,” Panos Tasiopoulos, senior project manager at the Wilfried Martens Centre for European Studies, writes.

The dogfights can get quite intense, as this video from 2006 shows:

Despite being NATO allies, Greece and Turkey have had a rough history. Modern day Turkey came into existence after a war with Greece and other allied nations in the aftermath of WWI. Tensions were further inflamed during the Cyprus Crisis, and almost erupted into full-scale war after Turkey invaded the island in 1974.

At the heart of the tensions are territorial disputes. Greece and Turkey share a land border in the north, but the border disputes are centered on the hundreds of islands in the Aegean Sea. There is debate between the two countries over the extent those islands' airspace and territorial waters cover.

The disputes have gotten so intense, that war has almost broken out between the countries on three separate occasions — in 1976, 1987, and 1996.

Turkish President Recep Tayyip Erdoğan has said that he wants to revise the Treaty of Lausanne, the recognized the sovereignty of the Republic of Turkey and defined the borders after the Turkish War of Independence. Greek President Prokopis Pavlopoulos responded that the treaty was in need “neither of revision nor of updating.”

“We want peace, we are not looking for a fight or for trouble in the Aegean,” he said. “But there won't be an aircraft which will not be intercepted.”