Staff Sgt. Adams didn’t hesitate. As he watched a truck veer off the road ahead of him and tumble down... 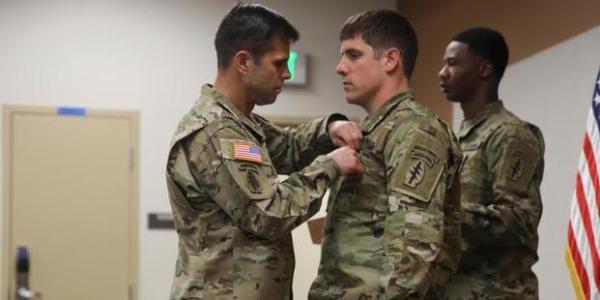 As he watched a truck veer off the road ahead of him and tumble down a steep, tree-covered embankment, the Fort Bragg soldier knew what he had to do.

When he lost his shoes running to the vehicle, he didn’t stop — even as glass became embedded in the soles of his feet.

And when he reached the truck, the billowing smoke gave him no pause.

“The only thing I could really think about was the people in the vehicle,” Adams said, two years after he leapt into action to save two people following a deadly crash on U.S. 64 near Asheboro.

Adams, a soldier with the 1st Battalion, 3rd Special Forces Group, repeatedly returned to the scene of the crash, carried four victims up the steep embankment and rendered emergency aid until rescue personnel arrived.

On Monday, Adams — who is not being identified by his first name because of the nature of his job as a Special Forces soldier — received the Army’s highest award for heroism outside of combat.

During a ceremony on Fort Bragg, officials praised Adams for risking his life to save others and presented him with the Soldier’s Medal.

More than 100 Special Forces soldiers and members of Adams’ family attended the event, during which a 3rd Group chaplain called him a “guardian angel” and proof that “good exists in the world.”

“There’s two folks who are alive today because of the acts of (Staff Sgt. Adams),” said Brig. Gen. Richard Angle, the deputy commanding general of the 1st Special Forces Command.

Angle said Adams made a conscious decision to risk his own life to save others.

“He not only made that choice once,” he said. “He made that multiple times.”

Adams said he and his wife were returning from a weekend trip at a family lake house on Oct. 10, 2016, when they witnessed the crash.

According to the Asheboro Courier-Tribune, the single-vehicle wreck occurred about 4 p.m. The newspaper said a N.C. Highway Patrol trooper reported that Lillie Mingin, 33, of Lexington, was driving a 2006 Chevrolet Silverado when the vehicle ran off the road, went into a ditch and then down the embankment.

One passenger, 26-year-old Brittany Goodman of Salisbury, was ejected from the vehicle and pronounced dead at the scene.

A child, 12-year-old Colby Springle of Angier, was trapped in the vehicle and died shortly after being extracted.

Springle was the son of Mingin, who survived the wreck alongside another of her sons, 7-year-old Eric Mason Mingin of Fuquay-Varina.

Army officials said the pair likely would not have lived were it not for Adams, who pulled them from the vehicle before a fire could start and provided lifesaving medical care.

Speaking about his actions two years later, Adams said there was no time to wait for emergency personnel or to see if others on the highway would stop.

“We were the first there,” he said. “It was my responsibility.”

As his wife called 9-1-1, Adams ran to the wreckage and went to work.

Adams has served with the 3rd Special Forces Group since 2015 and has deployed twice with the organization. He said his Special Forces training helped him remain calm as he helped pull the family from the wreckage. But Angle said it was more than training that led Adams to risk his life for the family.

The Special Forces community looks for physical and moral courage in soldiers well before they have earned the coveted Green Beret, he said.

The Army may have provided Adams tools to help do what he did, Angle said, but that is only part of the story.

Adams’ actions were rooted in his upbringing, the general said.

“We simply refined it,” Angle said. “We reinforce it.”

“Mom, you raised a heck of a young man,” Angle added while turning to Adams’ family, some of whom traveled from Vermont for the ceremony.

After the ceremony, Adams said his actions that day were “just another day on the job.”

But leaders said what Adams did was anything but ordinary.

Angle said soldiers are prepared to risk their lives when deployed in combat, but few are ever asked to do so when they are home.

“That’s not what you’re expecting to do,” he said.

Adams knew the risks of being near the truck, which could have caught fire at any moment, Angle said. Yet he returned to the vehicle “again and again and again.”

“It takes a special person to do what he did,” added Maj. Crocker, the acting commander of 1st Battalion.

He said 3rd Special Forces Group soldiers are accustomed to being honored for valor in combat. Most would say that’s simply part of their jobs. What Adams did was entirely different, Crocker said.

“Staff Sgt. Adams saw four of his fellow human beings in desperate need of help,” he said. And in trying to save them, proved that the Army’s “capacity to do good in this world is not limited to the battlefield.”

Officials said the Soldier’s Medal requires that a soldier do more than save a life. The soldier also must voluntarily risk his own life to save others.

That Adams was willing to do that came as no surprise to his Special Forces team, according to team leader Capt. Blake.

“He’s one of the most hardworking guys on the team,” the captain said, describing Adams as a soldier always looking to learn and improve and the team’s “go-to” guy.

Blake said Adams came to work the day after the wreck and was more quiet than normal. He initially didn’t want to share any details from his heroics, but officials learned of his actions through his wife and others.

“We had always called him the hero,” Blake said. “It just kind of confirmed my beliefs.”

Angle said many people say they would risk their lives to save others, but Adams is one of the few who proved that he would.

He said the soldiers in attendance could learn from him.

“My challenge to all of you… use (Staff Sgt. Adams) and his actions as an example,” he said. “Make that decision to do the right thing. No matter how big or how small the act.”