Before he deployed to Afghanistan on Feb. 11, Staff Sgt. Mark De Alencar of the Army's 7th Special Forces Group... 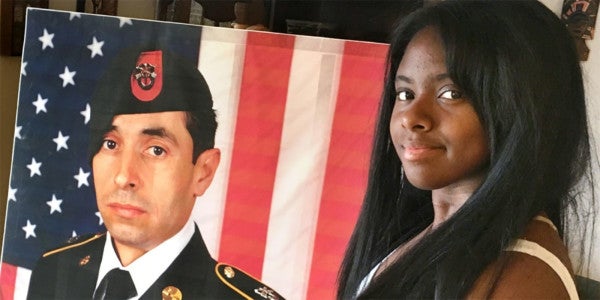 Before he deployed to Afghanistan on Feb. 11, Staff Sgt. Mark De Alencar of the Army's 7th Special Forces Group had a talk with his stepdaughter, Octavia Osborne.

The Green Beret asked the 17-year-old, whom he had raised since she was 3, to look after her mother and two younger siblings. There was one more thing, too.

“He told me he'd be back in time for my graduation from Niceville High School,” Osborne said with a slight smile. “He promised.”

Sadly, that was one promise De Alencar couldn't keep.

On April 8, De Alencar was killed in action in Nangarhar Province. He was 37.

'The key to a better life'

According to De Alencar's widow, Natasha, Mark always dreamed of being a soldier.

“His family has a picture of him dressed up like an Army man when he was like 3 years old,” Natasha said with a laugh. “That dream finally came true when he enlisted in 2008.”

By that time, the couple had been together since 1996, when they met in Edgewood, Maryland. Both Natasha and Mark had children from previous relationships, and after they married they had two children together.

When Mark enlisted, their blended family became a military family, with all that entails. They moved to their first assignment in Hawaii and then to North Carolina, where Octavia started her junior year of high school.

“And then we gave her the bad news — the military was sending us to Florida, right in the middle of her senior year,” Natasha said. “You can imagine how hard that must have been for her. But she never complained. She took it like a champ and did the best she could.”

At Niceville, Octavia worked hard. Her family put a great deal of emphasis on good grades, and she didn't want to let them down.

“That was always a big thing with my dad,” she said softly. “He believed education was the key to a better life.”

A sea of uniforms

Not long after De Alencar's death, a member of an Army care team contacted Natasha to ask about Octavia's graduation ceremony.

“They asked me if I would ask the school administration if there would be enough room for some of the Green Berets from the 7th Group to attend,” Natasha recalled. “I asked how many, and he said 'about 80.' I was like, '80? Really?' “

Octavia had heard that some of her dad's brothers-in-arms planned to attend her graduation ceremony May 25, but the reality of what that meant didn't really sink in at first.

“It dawned on me here and there that they were going to be there, but it didn't really hit me until I got to the graduation and saw all those men sitting there in the stands,” she said.

The contingent from the 7th Group included not only the Green Berets in their dress uniforms, but many of their spouses and children as well. When Natasha and her mother, Yolanda Thornton, arrived at the stadium, Octavia's special cheering section was already in place.

“They were saving seats for us!” Natasha said, her voice still filled with amazement at the memory. “I was overwhelmed. Everyone who was there had taken time out of their busy lives because they knew we had that void we were missing. They just wanted to let us know that they had our back.”

As the names of Niceville's hundreds of graduates were called, Octavia sat a bit nervously on the football field. She didn't know what to expect when her own name was announced.

“I thought since they were servicemen, they'd be really quiet and just kind of be there,” she said of the contingent that came to support her. “But when my name was called and you heard this uproar from the stadium, it caught me off guard. I didn't know if I should be embarrassed, starstruck or what. But it was really like an exciting rush.”

Thornton, Octavia's grandmother, said that moment was one of the greatest in her life.

As she looked around at the sea of men in uniform, Thornton said she shared a silent thought with her son-in-law.

“I thought, 'Mark, you gotta be looking down and smiling down on this one,' ” Thornton said, her voice choked with tears. “You had military men who knew what their role was.

“They reached out on behalf on their fallen brother to let his daughter know they were going to be there for her. It made my heart feel so good, because she had been through so much to get to that day.”