Known as Robin Sage training, the unconventional warfare exercises are like live-action role playing, with hostile engagement between Special Forces students, volunteer civilians and soldiers out of Fort Bragg 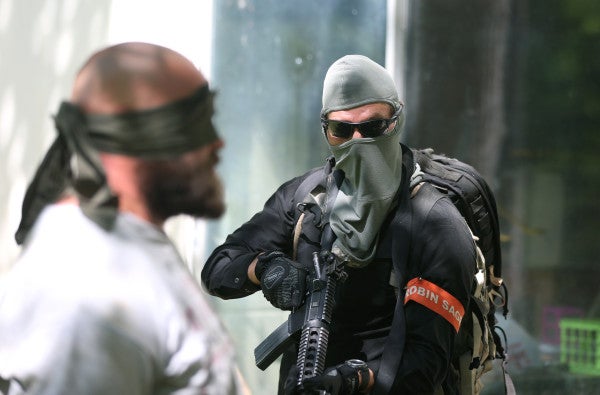 Fort Bragg is warning the public that suspicious looking military activity could erupt on private land across multiple North Carolina counties next month as part of a cryptic Special Forces training exercise.

This could include hearing explosions and seeing soldiers acting as ”guerrilla freedom fighters,” according to a release from the U.S. Army John F. Kennedy Special Warfare Center and School at Fort Bragg.

Exact times, locations and exercise specifics are not being publicized, officials said in the release.

“Residents may hear blank gunfire and see occasional flares … No real bombs will be used, but people in nearby areas may hear loud bangs that replicate the idea of a bomb,” officials told McClatchy News.

“Controls are in place to ensure there is no risk to persons or property. Residents with concerns should contact local law enforcement officials, who will immediately contact exercise control officials,” a release said.

Known as Robin Sage training, the unconventional warfare exercises are like live-action role playing, with hostile engagement between Special Forces students, volunteer civilians and soldiers out of Fort Bragg.

The program dates back 60 years, officials said. But advance has became more critical after a soldier was killed and another was wounded in 2002 by a Moore County deputy who mistook Robin Sage for criminal activity.

The exercises will run March 6 through March 19, and students may pass through any one of 21 counties, including Wake County and Union County, according to a press release. The engagements will take place out of public view on private land, officials say.

The participants may be in civilian clothes, but will wear “a distinctive brown armband,” and all the active training areas will be “clearly labeled,” officials said.

“Candidates are placed in an environment of political instability characterized by armed conflict, forcing Soldiers to analyze and solve problems to meet the challenges of this ‘real-world’ training.”

SEE ALSO: This is the Army video that finally introduced America to the Green Berets