In 1994, an F-16 fighter jet collided with a C-130 cargo plane near the runway at what was then Pope Air Force Base. The jet then slammed into a C-141 cargo plane on the tarmac 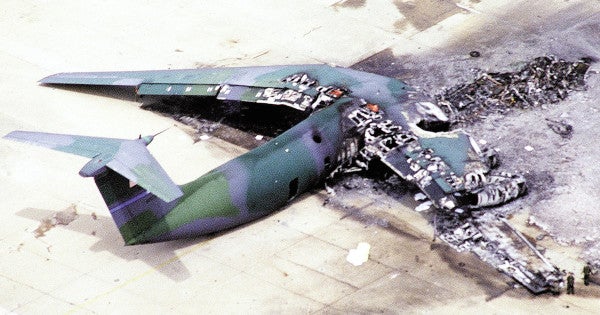 Retired Lt. Col. Jay Nelson is often asked when he recovered from a 1994 accident that killed 24 fellow paratroopers as they were preparing for a jump.

“I tell folks I'll let them know when I get there,” he said.

Nelson, who was burned over about half his body in the accident, spoke at a ceremony Friday that honored the soldiers who died. The event marked the 25th anniversary of the accident, which happened on March 23, 1994, at Green Ramp on what is now Pope Army Airfield.

An F-16 fighter jet collided with a C-130 cargo plane near the runway at what was then Pope Air Force Base. The jet slammed into a C-141 cargo plane on the tarmac.

The collision ignited 55,000 gallons of fuel that was in the C-141 and spread a massive ball of fire and shrapnel over the paratroopers. Live 20 mm rounds from the F-16 went off, sending bullets flying toward the soldiers.

Nelson, who was burned on his arms, legs, back and head, said recovery from the accident is not something over which he can declare victory.

“Recovery is a process,” he said. “For some, it's a lifelong process.”

Resilience is a skill that must be practiced, Nelson said.

“If the last 25 years have taught me anything, it's that we're all recovering from something,” he said.

Retired U.S. Army Lt. Col. Jay Nelson, a survivor of the 1994 Green Ramp Disaster, speaks to attendees of a memorial ceremony at Fort Bragg, N.C. marking the 25th anniversary of the event on Mar. 22, 2019.

Maj. Gen. James Mingus, commander of the 82nd Airborne Division, also was in the area getting ready for a jump when the accident happened. He said he was talking to a friend when he saw the fire ball coming.

“Everybody scattered,” he said.

Mingus said he knew three of the soldiers who died. He said the accident taught him that life is precious.

Paratroopers who weren't killed immediately went into action trying to save their fellow soldiers, Mingus said. Some ran into the blaze, he said.

“Leadership matters in a crisis,” he said. “There was no rank out there on that day.”

Darrin Dunaway, who is from Mena, Arkansas, was at the service to honor his brother, Capt. Christopher Dunaway, who died.

Dunaway said his brother loved being in the Army and in the 82nd.

“He was doing what he wanted,” he said. “They died doing what they loved.”

Dunaway said he and his family were doing what they would normally do when they found out about the accident. Initially, they thought his brother was OK, but later found out that he had died.

“Everything changed,” he said. “It doesn't get any easier.”

Nelson mentioned Dunaway and several other soldiers in his remarks. He said Dunaway never got rattled.

The accident at Green Ramp was a tragedy, Nelson said.