When El Rancho High School teacher Gregory Salcido was secretly recorded telling his students that members of the military were “dumb” and... 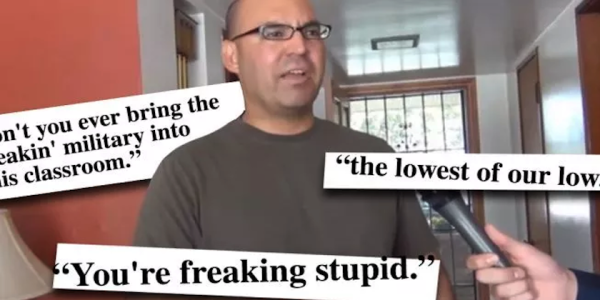 When El Rancho High School teacher Gregory Salcido was secretly recorded telling his students that members of the military were “dumb” and the “lowest of the low,” the public outcry was swift and withering.

Within months, Salcido would be out of a job, and his position as a Pico Rivera city councilman would be called into question.

On Tuesday, however, El Rancho Unified School District released a report that suggests Salcido's firing was not based on a single classroom diatribe.

Instead, the report suggests the firing was based on a pattern of alleged outrageous behavior that included “bullying” students with disparaging comments and “corporal punishment”; improper use of a classroom computer; and the shocking use of profanity and racial slurs in front of students and staff.

Details of the investigation were first reported in the San Gabriel Valley Tribune.

Salcido has appealed his dismissal.

Related: The A-Hole Teacher Who Bullied A Student For Wearing A USMC Sweatshirt Has Been Fired »

In an email to the Los Angeles Times on Wednesday, the former teacher wrote: “My pending appeal to the State serves as a clear indication of my disagreement with the motivation, method, and contents of the District's investigation.”

The investigation was conducted by Steve Hummel, a private investigator who owns the digital forensics and IT firm Paradox Technology.

“The students that get the most bullying follow a pattern where they are White, Asian, Pro military, Christian or gay,” the investigator noted in the report.

In his report, Hummel recounted accusations that Salcido called a white student a Nazi, used an anti-Latino slur, singled out LGBT students, made disparaging weight-related comments, grilled a student about religious beliefs, and called a student a bitch during class.

A former assistant principal said Salcido would “go off on these weird tangents and say, 'Well because we used to hang black people we should keep hanging them,'” according to the report.

There are multiple allegations from students in the report that he told students that committing suicide is a choice they should be able to make.

A student provided the audio to the investigator, and told him that a school employee brushed off her and her father's complaints and refused to listen to the recording when the incident occurred in the 2016-17 school year, according to the report.

This isn't Salcido's first brush with misconduct allegations. He was suspended in 2012 for hitting a student. More recently, students told the investigator that Salcido inflicted physical punishment for tardiness. Students claimed they were required to perform squats or pushups in front of the class.

“A girl in a short skirt was berated in front of the class to do a squat until she left in tears. He was previously warned by administration in writing to stop this practice as it constitutes corporal punishment,” according to the report.

An analysis of the hard drive on Salcido's classroom computer revealed that he conducted Pico Rivera city business on his El Rancho computer, the report says.

The hard drive also included four deleted images, according to the report: three of nude or mostly-nude women, and one of a young boy standing behind a large Sumo Wrestler pulling on his 'Mawashi' (thong like garment).”

The presence of such images on a district-owned computer violates the district's technology use policies, the report notes.

The report suggests that administrators at the school were aware of Salcido's alleged behavior, and attempted to address it.

“During the last decade Mr. Salcido has received numerous letters of reprimand” as well as memos about his “unacceptable behavior and verbal guidance not to swear, name call, threaten, kick out of class, use racist remarks or bully the students,” the report says.

One assistant principal, who began his job in October 2017 and was in charge of evaluating Salcido, told the investigator that he noticed Salcido's use of profanity and was concerned about him missing professional development sessions. He added, “He really is trying for good, but I don't know if he can manage himself and really do what he wants to do in a professional setting,” according to the report.

Counselors at the school tried to protect students from him, according to the report. One counselor told the investigator that in the last 11 years she's moved about 25 students out of his classes, and others have asked her not to place them in his classes.

“Anyone that she knew was pro-military or not a highly motivated achiever was not placed in his class. She said it wasn't fair to put those kids in there because of his tactics,” according to the report. Another counselor said that students with military ambitions asked to be removed from Salcido's class last semester, the report said.

Multiple board members said they were shocked at the details of the report they received last month.

Asked why a principal did not notice the behavioral patterns he is accused of and address them, El Rancho Unified school board President Aurora R. Villon said the school has had three principals in the five years she's been on the board, and she has not received complaints about Salcido.

“There are other areas we need to just start looking at as far as why that happened, why it was not reported,” Villon said. Children should feel comfortable telling counselors and principals when they are being abused, and, “We need to make sure we put in place protocols so situations like this will never happen again,” she said.

School board member Jose Lara said he believes students should feel empowered to speak up when they are being mistreated, but its the adults' responsibility to ensure that doesn't happen in the first place.