Grieving Gold Star Father Says Trump Offered Him $25,000 In A Call, But Never Followed Through

A grieving military father told The Washington Post that President Donald Trump offered him $25,000 after his son was killed, but said... 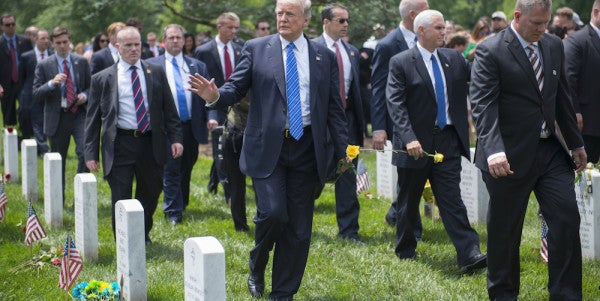 A grieving military father told The Washington Post that President Donald Trump offered him $25,000 after his son was killed, but said the president didn't follow through.

During a call with the president, The Post reports, Trump offered to write Baldridge a personal check of $25,000 and said he would work to establish an online fundraiser for the family. Neither has yet happened, Baldridge said.

“I could not believe he was saying that, and I wish I had it recorded because the man did say this,” Baldridge said. “He said, 'No other president has ever done something like this,' but he said, 'I'm going to do it.'”

A White House spokeswoman told The Post that the check has now been sent.

Trump had been feuding Wednesday with a congresswoman over a call he made to the widow of a soldier who was killed in Niger earlier this month.

Rep. Frederica Wilson of Florida said Trump told Myeshia Johnson — the widow of Sgt. La David Johnson, one of the four troops killed during a mission in Niger — during a condolence call, “He knew what he signed up for, but when it happens, it hurts anyway.”

“President Trump did disrespect my son and my daughter and also me and my husband,” Jones-Johnson told The Post.

Trump publicly disputed the congresswoman's account of the call in a tweet Wednesday morning, writing, “Democrat Congresswoman totally fabricated what I said to the wife of a soldier who died in action (and I have proof). Sad!”