A wildfire ignited mines laid by the Cuban military decades ago and jumped the fence line at the U.S. Navy... 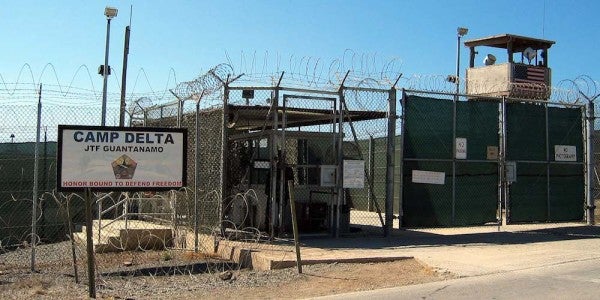 A wildfire ignited mines laid by the Cuban military decades ago and jumped the fence line at the U.S. Navy base at Guantánamo Bay on Thursday, threatening buildings and forcing evacuations of six neighborhoods.

“Right now everyone is safe,” base spokeswoman Julie Ann Ripley said Thursday afternoon. Base workers were “doing a full accountability report,” a military term for checking rosters and counting heads. Navy C-12 aircraft were flying overhead scouting the scene but did not have the capability of dumping water on the fires, Ripley said.

Base security officials shut down the road leading to the Detention Center Zone, cutting off the main part of the outpost from the base within the base where the Pentagon holds 41 war-on-terror detainees.

“You can’t see the fire, but you can see a lot of smoke,” American Civil Liberties Union attorney Denny LeBoeuf said by telephone soon after arriving on the base Thursday. She wondered whether the remote base, which plans extensively for Caribbean hurricanes, also had a way to evacuate war-on-terror detainees from their secret maximum-security prison.

Ripley said the fires started Wednesday and “came over from the Cuba side. It was originally under control and contained.” But shifting winds Thursday strengthened the fire, forcing evacuations of hundreds of people from six base housing areas where some of the 5,500 people on the base live in suburban-style housing.

In an afternoon broadcast on the base station, Radio Gitmo, base commander Navy Capt. Dave Culpepper advised: “Folks probably heard in the middle of the night a bunch of ordnance going off. And of course that was the fire burning on the other side of the fence, over on the Cuban side, their mines cooking off from the heat.”

An announcement on the base’s Facebook page listed the evacuation zones as the Caribbean Circle, Kittery Beach, Nob Hill, Tierra Key, West Iguana and Villamar housing areas. Nob Hill housing is on the road to the abandoned Camp X-Ray prison; Tierra Key is on the way to the current Detention Center Zone.

Residents of those six housing areas were advised to take shelter in either the base gym or the ballroom of the Windjammer restaurant complex. Parents were alerted at 3:30 p.m. to pick up their children from an after-school program. A shelter was also opened for people to bring their household pets before heading to the gym or ballroom evacuation sites.

Related: He Became A SEAL To Fight Terrorists. Now He’s A Navy Lawyer Defending An Accused One »

The prison spokeswoman, Navy Cmdr. Anne Leanos of Joint Task Force Guantanamo, known as the JTF, did not respond to an email seeking comment on the development — which shut down a medical clinic for U.S. troops assigned to the 1,700-member prison staff.

“One of the things that occurred to me is, evacuating a high-security prison in the event of a hurricane is one thing,” said LeBoeuf, an attorney for the alleged mastermind of the Sept. 11, 2001, attacks Khalid Sheikh Mohammed. “Evacuating people for a wildfire is really something else. And I wonder if JTF has a plan to evacuate Camp 7 and the other camps of imprisoned, locked down men in a hurry.”

A notice to base residents advised: “Buses have been mobilized to assist with the evacuation. Please follow all directions of security personnel on scene.”

The emergency occurred a week ahead of a planned session of the military commissions in the 9/11 mass murder case. War court staff members were advised Thursday afternoon that, as of that point, the war court compound called Camp Justice, and far from the prison zone, was not threatened by the wildfires.